November and December are usually littered with feel good holiday movies. But if those aren't your cup of tea, here is a list of horror movies that will have you hiding under your covers! 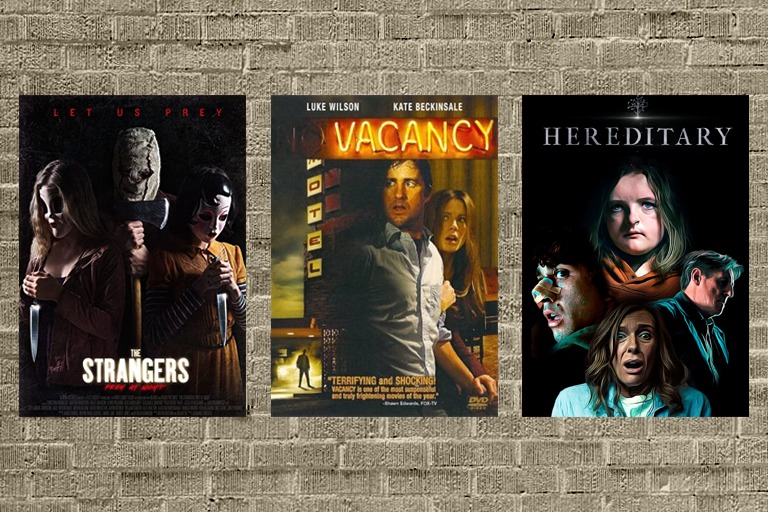 KARACHI: The last two months of the year usually mark the start of over the top feel good holiday movies. Ones with tears (happy ones), love, family and laughter. The kind of movies that have you rolling your eyes at how unrealistically happy everyone is. If you’re looking for something a little in the other direction/genre, here’s our treat for you. Here are some of the best horror movies that will leave you wishing you opted for those annoying holiday special movies!

No normal person sits down in their room & starts watching horror movies alone. Are u satan

When The Purge came out, people were drawn to the movie for two reasons. The creepy masks and the fact that the movie was about a home invasion (you’re supposed to feel the safest at home) made up what the plot was lacking. But long before The Purge, there was a movie called The Strangers and boy was it scary.

Based on some similar real life events, the movie follows a couple who makes a stop at their summer home for the night. But as the night wears on, three strangers terrorize the couple in their own home. What makes the movie so scary is that you can see the things the couple can’t. The movie has all the elements needed to make the perfect horror movie. The shadows in the dark offer jump scares, the creepy masks make you feel uncomfortable and there’s just the right amount of violence.

Vacancy was released in 2007 and is another classic horror movie which has all the elements needed to make the perfect horror movie. The movie follows a couple played by Luke Wilson and Kate Beckinsale, who are on the verge of divorce. On their way back from a party, they take a wrong turn and their car breaks down and are forced to spend the night at a very creepy motel.

The very first sign that something is amiss with the motel is when they hear screams but are reassured by the front deskman that they are coming from a movie. Once the couple retreats to their room, they are harassed with insistent banging on the door and anonymous phone calls but when they complain, they’re turned away because apparently they’re the only ones in the motel. The couple soon discovers tapes that turn out to be actual home videos of murders that took place in the room but of course leaving isn’t so easy and they are hunted down by masked men intent on killing them.

Vacancy is also loosely based on real events. A New Yorker magazine article from 2016 about a couple who owned a motel and had built a system of crawl spaces to spy on guests and when they got bored of spying on them they started experimenting. The letter is incredibly creepy in itself and adds to the reasons why Vacancy is one of the best horror movies.

Hereditary is its own brand of horror. The movie is a psychological thriller that is combined with an equal amount of horror. Tragedy upon tragedy makes you almost feel claustrophobic whilst watching the movie and gets under your skin. Not to mention it is graphic as well.

A tragedy forces a mother to reach out to her dead daughter’s spirit. But as it turns out, the spirit might not be her daughter’s and she may just have opened up the pathway for a much more sinister force! To be fair, while the movie is one of the top rated horror movies, it does require a bit of patience to get through.

The Conjuring franchise is based on real life ghost hunting couple Ed and Lorraine Warren whose lives were greatly impacted by their choice of work. It’s hard to choose just which one of the movies is more scary but they all definitely deserve a binge watch.

The first movie follows a family who move into a new home (not exactly, it’s an old home but new for them) but not soon after do strange things start happening. The paranormal acitivty becomes violent and with the help of Ed and Lorraine, they learn they are being haunted by an evil witch. Complete with jump scares, possessions and creepy dolls, Conjuring is one of the best supernatural horror movies to watch.

The second installment is also equally as scary. Based on another family being haunted by an evil spirit the movie also touches upon subplots as well. From whether the haunting was a hoax to Lorrains’s own haunting, Conjuring 2 has a well deserved spot on the list of the best horror movies.

One would assume that clowns are meant to be funny and one would assume a clown called Pennywise the Dancing Clown would bring out giggles. But boy are you mistaken. Pennywise is one clown you never want to meet.

Based on the book by the king of horror Stephen King, IT follows a group of kids from a town where kids are being preyed on by killer clown Pennywise. The clown who has fangs for teeth feeds of the kid’s fears and hunts them down and together the Losers Club is forced to tackle their induvial fears head on in order to stay alive. What makes IT one of the best horror movies is that it plays on all our emotions. It’s sad, it’s scary, it’s disturbing, it’s funny and it’s realistic.

So grab a blanket, a bowl of popcorn, turn off the lights and prepared to be scared out of your witts!