My husband is not my child, he is my life partner: Nadia Hussain 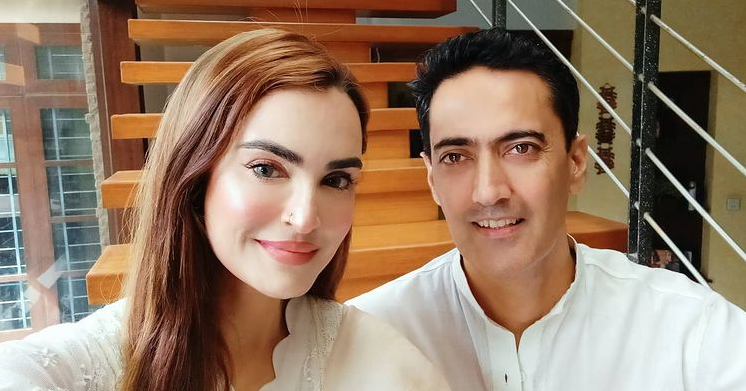 KARACHI: Nadia Hussain and her husband sat down for an interview with Fiza Shoaib, in an episode of Hamare Mehman on ARY News. Throughout the course of their conversation, Hussain urged the anchorperson to see women’s rights for the violations they face, while urging viewers to extend support to the women of their house.

While the anchorperson seemed to have an agenda to undermine Aurat March, Nadia Hussain took matters into her hands to explain what a woman in 2021 expects as an equal contributor to society. “Since you are both here together, and there has been a lot of discourse on social media on the subject of feminism, about what a man or a woman needs to do and not do. Let’s take the example of Aurat March, it has become less about women, and more about men. It is more about what a man needs to do and what a man should not do. Are they talking about women’s rights, and are people understanding those issues?” she asked Hussain.

To this, the supermodel-turned actor replied, “As a daughter I have rights. I have the right to inheritance. If not equal, I still have the right. Other than that, as a woman, I have the right to freedom to drive, to education, and decide who I want to marry. If I do not wish to marry someone, it is a big issue for women. However, if you willingly give the responsibility of choosing your spouse to your parents, I’m most certainly not against that. However. I do have the right to decide my future.”

Equating the issue with men not having a chance to choose their own career path and having to continue family businesses based on the family legacy, as well as sometimes marrying at a young age, Shoaib asked Nadia Hussain and her husband whether or not men are in the same boat. To this, Hussain explained that violations of women’s rights are more rampant and systemic.

She said, “It is more women-specific in our culture. I am not disagreeing that men do not face the issues mentioned, but women are frequently put under more pressure. Women are forced more often to marry according to their parents’ wishes, choose a certain career path. After marrying, the fate of a woman’s career entirely depends on whether her husband allows her to work. With her husband’s own decision having been influenced by his family.”

Once again bringing the conversation back to Aurat March, Fiza Shoaib complained how Aurat March does not discuss many of the issues Nadia mentioned, such as inheritance, education, etc. “These are the things we are getting to hear here,” she stated. “All Aurat March is talking about is who’s roti or who’s shoes it is.”

The anchorperson also asked Nadia Hussain, “Is serving her husband a woman’s responsibility or not?” To this, Hussain schooled Shoaib on how it actually is not. “No absolutely not,” said Hussain in a heartbeat. “Then what is it? Have you done any work for your husband,” Shoaib asked Nadia Hussain.

“Why should I do his work? He is not my child, he is my partner. He is my life partner.” To this Shoaib added, “The way in our society our men are raised, they see a mother is working, serving him food. A sister is always bringing him water.” Hussain quickly disagreed with that way of life and said, “That is wrong, and I am not raising my kids like that.” The host then asked what happens if a husband asks his wife to bring him food or water. Hussain said, “Yes, that is fine. But to DEMAND and then to expect that it is her job. Expecting a woman to serve a man after she has spent the day working herself, this I feel is wrong to expect from a woman.”

Her supportive husband also chimed in and explained how Nadia Hussain did not really have to struggle to find her place within the family after marriage. “In my family, women have always worked. My mother is a doctor, my sister is a banker who is still working in the US. So expecting a woman to work was very normal for us.

“Atif did let me fight my own battles, but I always had his support. For me, this was very important,” Nadia Hussain added, to which her husband Atif explained to Shoaib that it was his upbringing that had taught him to support her.

Hussain also added that her father-in-law pointed out that clause 18 of the Nikkah-Nama where the bride can put her conditions and demands must not be crossed out, at the time of her marriage.

The anchor also suggested that women watching the show could be feeling excited by the things Nadia has been saying, however, what should a woman who cannot seek support from her family do for her rights? To this, Nadia urged that a woman’s basic rights cannot be sidelined. She said, “Support is important from family.” The anchor quickly asked, “should she fight with her father?” Nadia explained that she should not fight, but she must try to convince her parents as much as possible. “Not giving their daughters her rights or the opportunities she deserves, parents are just ruining their daughter’s lives because the coming times will not allow for single-income households,” she explained.

“I wouldn’t want a girl to watch this and get rebellious,” Shoaib quickly looked in the camera and gave her disclaimer, at which Nadia Hussain and her husband explained that rebelling is not necessary, but asking for support is. Shoaib also asked the makeup guru how parents in this day and age are afraid of sending their daughters out given the societal conditions of the country. The supermodel then explained that while ensuring safety, parents must not take away a girl’s basic rights, and treat both, their boys as well as their girls equally. If a girl is being homeschooled, a boy should be too.

Nadia Hussain and her husband Atif Khan, have completed 18 years of marriage, and continue to support each other.