Each day, we lie a little more because frankly, how many of you are ready to hear the truth? 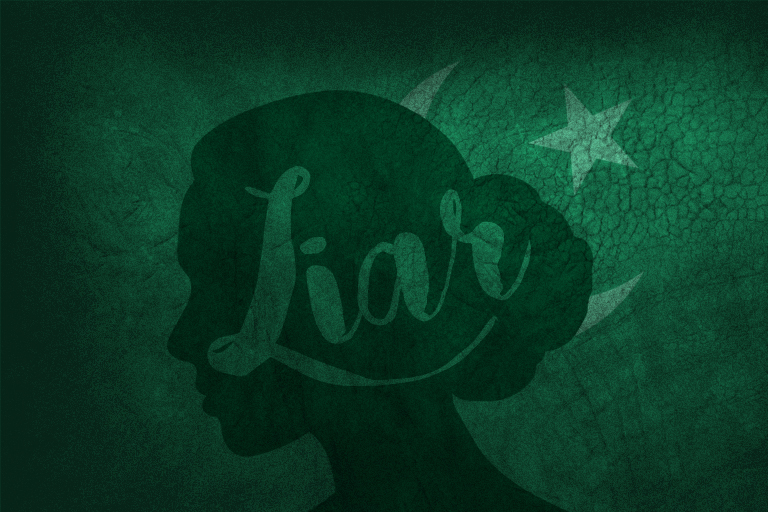 KARACHI: “Can you help me list down names of the criminals going around these days? I’ve lost track at this point,” I texted a colleague earlier today. That was the most recent lie I’ve told. I wish I had lost track of their names, and their faces, and the crimes they have committed. Truth is, their details are the only information my mind can retain at the moment because of the number of times I’ve seen their pictures and news on social media in the last few days. But this is not just my story, this story belongs to Noor Mukadam (who is no longer alive to fight her case), Khadija Siddiqui and Qurut-ul-Ain, this belongs to Wishah Abubakr, who wants to seek refuge from her husband Shahzawar Bugti, before her name is added to the list.

Pakistani women are used to being called liars. We are accused of false allegations, of defaming men. We lie to get attention, we lie because we don’t want to admit that we ‘asked for it’. I write this today to confirm that yes, as a Pakistani woman, I lie all the time, but not for the reasons you would think.

I lied to myself this morning as I set an alarm for 9 am, hoping to get some work done. Aren’t alarms supposed to be for people who sleep? And I haven’t slept in days, just like so many of my female friends. I can’t get Zahir Jaffer’s face out of my head, or a friend’s Instagram story that read, ‘I was raped by Shahzawar Bugti’, the same man whose wife is now scared for her life. I lied when I forced myself to get out of bed because I had deadlines to meet for both of my jobs. I lied when I thought I could think of anything except the femicide happening in my country, and I lied when I convinced myself that I could be functional today. Because it’s not my turn to be dead. Not yet anyway.

When Zahir Jaffer’s story first came out, the one question that so many people asked about Noor Mukadam was, “What was she doing at his house?” Forget the fact that the man beheaded the girl, forget the fact that she is dead. We want to know why she was at his house in the first place. Here’s the thing, Noor might have been at her murderer’s house involuntarily and she might have been forced to lie to her family about her whereabouts. But so many of us consciously lie to our parents. Is it because we’re off to indulge in activities that our families are not supposed to know of? No. Pakistani women lie to survive. We lie to be able to breathe, even if it’s only for a few hours.

As a woman, I’m not as afraid of death as I am of dying in a place where I wasn’t “supposed” to be. The thought of my parents hearing “why was she there?” while mourning my loss is unbearable. We are burdened even after death.

We lie about where we are going, who we are going with, when we will be back. Because you see, whatever we say or do can be and is held against us. Our mobility is already so limited that the only way we can gain temporary freedom is if we lie. So we lie about being at that one friend’s house, who our parents trust, because how are we supposed to trust more than one person in this terrifying country? We promise to be back home by sunset because women aren’t supposed to exist in this country at dark, that is if they live to see daylight. We never confess to going to a male friend’s house because how dare we trust a man?

Recent incidents in my country have me terrified to the extent that I no longer feel like going out. But on the occasions that I will have to step out, I’m already thinking of lies. With women being raped and killed every single day, are my parents even wrong in their wish to protect me? But I would be lying if I said women are safe as long as they stay in the comfort of their houses. And I would be lying if I said I didn’t want to escape, even if all I can escape are the walls of my house.

So you see, us women are stuck in the middle. We’re trapped either way. I remember telling my mother, “You need to be scared of lesser things, because I’m not scared.” I lied. I am scared beyond belief.

Not long ago, I listed down things I can’t afford as a millennial woman. Now I realise that I lied to myself while writing that story too. There should have been no story, just one line. I can’t afford to be alive as a woman in Pakistan.

My story is nowhere as traumatising as that of Noor Mukadam whose case is being talked about left, right and centre. Or Qurut-ul-Ain. Or Khadija Siddiqui. Or the hundreds of women who are killed in the name of honour, love, revenge, power. Because you see, I’m still alive. And I would be lying if I said that with a sigh of relief.