Who is to blame for the dog attack in Karachi?

Questions about who was responsible and whether the donation was in good faith were asked. 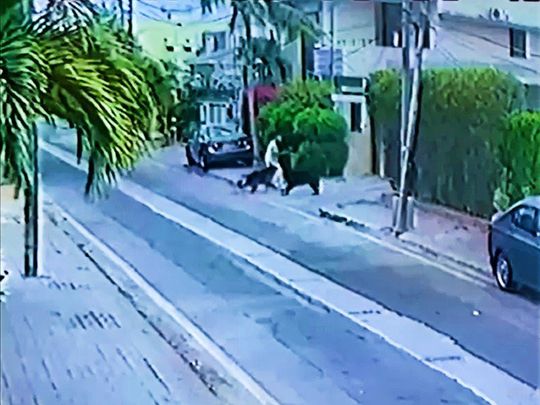 KARACHI: A vicious dog attack in Karachi, a sizeable donation to an animal rights foundation and the heart wrenching decision to put two pet dogs to sleep have been the talk of the town over the past few days. The attack also raised a lot of questions about who was right and who was wrong and caught up in the middle of the controversy was the Ayesha Chundrigar Foundation. Here’s all that you need to know about what happened.

What started off as any ordinary day would have for Mirza Akhter Ali ended up with him being mauled by two large dogs for absolutely no reason. The videos of the dog attack, which were recorded by a CCTV camera, were distressing to say the least. What should have been a de-stressing walk landed Mr. Ali in an emergency surgery with not just physical but emotional injuries as well. As it would turn out, both, Mr. Ali and his son, Taimur Ali Mirza are lawyers and they did what lawyers do best and decided to take the dog owner, Mr. Humayun Khan to court. After the attack, details began to emerge with some sources claiming that this wasn’t the first time the dogs had attacked someone unprovoked and it became a no brainer that the owner of the dogs was responsible for his dogs’ behavior.

This video more clearly shows how the dogs attacked the lawyer. Totally irresponsible on the part of Humayun Khan, former police officer, who owns the dogs and is now being nominated in the FIR https://t.co/aVytsCmbaN pic.twitter.com/ec5qag5OBI

The dog attack in Karachi opened up conversation about what it takes to be a responsible pet owner. As any dog owner would know, dogs are animals that require proper time and attention and have to be trained from a young age to ensure that they don’t pose a threat to others. Many were quick to point out that that unfortunately this isn’t how dogs are raised in Pakistan. Dogs, especially breeds such as German Shepherds, have become a status symbol and are often left to hired help, who have no expertise in dog handling, to be taken care of. It is not an uncommon sight to see dog walkers attaching the dog leashes on their motorcycle handles instead of actually walking the dog.

You "adopt" a pet. You don't "buy" an object. It's a responsibility not just a prop for your insta. It has needs & when you adopt it you sign up to fulfill those needs & perform that responsibility. Leaving untrained pets in hands of untrained staff can have fatal consequences.

However, the conversation took a turn when it became public knowledge that an out of court settlement was agreed upon. The terms of the agreement included that the dogs be euthanized and that a donation be made to The Ayesha Chundrigar Foundation. For those of you who are unaware of what ACF is, they are an animal rescue team and shelter. They focus on helping stray animals, especially dogs who have been a victim of culling. And here’s where the trouble began. 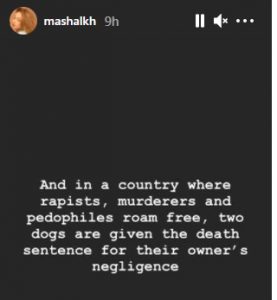 But here’s what most people don’t seem to understand. The decision to put the dogs down actually resonates with international procedures. In fact, there is an entire guideline set up to determine what constitutes as a vicious dog attack. As per the Ian Dunbar’s Bite Scale or Dr. Sophia Yin’s Canine Bite Levels, there are six categories in place to make the decision: 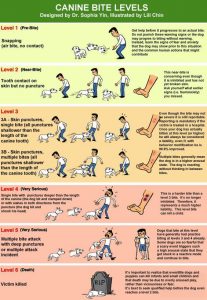 The dog attack in Karachi stood at a level 5 which is when the dog inflicts multiple bites or attacks victims multiple times.  and so the decision made sense. There was no malicious intent on the part of the aggrieved party. Their condition to put the dogs down was actually for the safety of the people.

Others were angered at ACF for taking what they believed to be “blood money.” Now here’s why this narrative is so problematic. ACF wasn’t involved with the entire situation at all. Taking to Instagram, they made this point very clear, “ACF has NO involvement in the case and we are horrified at how we are being accused of being “criminally silent” or “suspiciously quiet.”  In fact, they didn’t even know about the donation being made in their name until it actually came through as they wrote “Our bank account is public. Anyone can send money and let us know afterwards. As it was in this case and usually is done. We saw the full legal settlement agreement forward on WhatsApp at the same time as everyone else yesterday.” They were happy to receive the money because just like any charity, they survive on donations and this hefty donation could have been used to save the lives of many stray dogs who are now at risk of being culled by the authorities following the attack.

If anyone should have been blamed in the dog attack that took place in Karachi, it was the dog owners. Their negligence cost two dogs their lives, a charity its good repute and an innocent man his health.