Why is the city experiencing extreme temperatures in summer over the past three years? 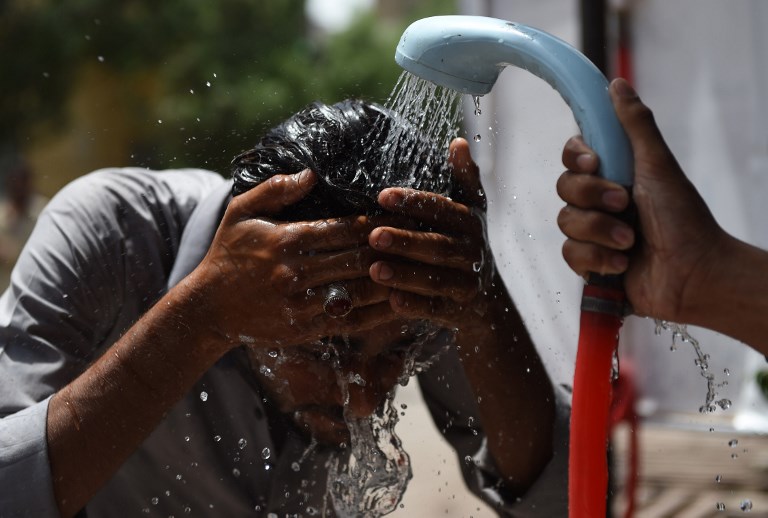 A volunteer showers a man with water during a heatwave in Karachi. PHOTO: AFP

KARACHI: Muhammad Fazal, 48, a mason at a construction site in Karachi starts his day at 7am and finishes at dusk. Even during Karachi’s unforgiving heatwave, work never stops.

“We’re accustomed to keep working, but it’s true that since last two to three years, it has been exceptionally hot,” he says.

Just this past weekend, Karachi’s temperature soared to 46 degrees Celsius. Since 2015, elaborate spells of heat have blanketed the city.

Karachi has always been hot and humid, but has seen an alarming rise in temperatures over the last three years.

According to experts in the field, discord between climate changes and temperature occur over long periods, sometimes two to three decades. “It may look as though it has happened drastically or since 2015, but in fact, signs of climate change, such as floods, torrential downpour outside monsoon season and so on began long ago,” reveals an official at the Pakistan Meteorological Department (PMD), who chose to remain anonymous.

The PMD official further states that climate changes aren’t just limited to Pakistan. “America and Europe experience greater torrential downpour than they did in the previous decade. About 40 to 50 years ago, heavy rainfall was spread over one to two months, but now the same quantity of rainfall occurs in a span of one to two days.”

Speaking on the matter, Syed Ghulam Qadir, an environmentalist at International Union for Conservation of Nature (IUCN,) says that scientists correlate this with global climate changes. “The atmosphere has a natural balance which ensures smooth functioning of the system, but that has been disrupted due to growing urbanisation, rapid industralisation and deforestation.”

How do you maintain the atmosphere’s natural balance?

Due to urbanisation and deforestation, there is increased consumption of fossil fuels such as petroleum, gasoline, diesel and coal, which leads to uneven emission of greenhouse gases, such as carbon dioxide, carbon monoxide and methane. Release of these gases in certain quantities is vital to maintain the natural atmospheric balance. However, smoke effusion from vehicles and pollution from industries causes uneven emission of these gases which disturbs the natural atmospheric balance.

“The disproportionate release of gases leads to heating up of the planet which eventually causes the greenhouse effect,” furthers Qadir.

What happens if the natural balance is disrupted?

The ‘greenhouse effect’ is what happens.

“This entrapment of heat is known as greenhouse effect and it largely determines the heating up of the planet,” explains environmental expert Qadir, adding that this phenomenon is known as global warming.

Effects of global warming aren’t just eminent in the form of extreme heat. Qadir recounts that floods occurred in 2010-11 due to excessive rainfall, which was a result of global warming. “In Thar, in 2011, over 11 millimetres of rainfall was recorded, which is an unusual measure for the aforementioned geographical zone.”

“To simplify it, our environment has seen a considerable rise in carbon dioxide due to emission from factories and cars, and so on and such high quantity of CO2 heats up the earth,” concludes Qadir.

Since Karachi is an urban settlement, it requires massive infrastructure support. Telecommunication, water, sewerage and transport facilities have outgrown their capacity. Architect and urban planner Farhan Anwar identifies that rising urban heat levels occur when a balance is not maintained between land allocated for infrastructure and open, vegetated land.

“Urban heat island effect can occur when on a hot summer day, the sun heats up surfaces such as roofs, roads and pavements up to 27 to 50 degree Celsius higher than the surrounding air; whereas, shaded and moist surfaces remain closer to the air temperature.”

In addition, activities like air conditioning devices that discharge exhaust out in the atmosphere add to heat levels. According to Anwar, the problem is compounded when unplanned urban densification happens in the city. The added heat load does not dissipate during daytime as it gets trapped within the dense built up areas and only releases in the evening thereby increasing surrounding temperatures.

How to avoid another heatwave

Eperts believe that Karachi needs to increase on an urgent basis its green cover that serves as a method of air conditioning the atmosphere. “Currently, there is a major push to go for vertical development and while vertical expansion can lead to more compact growth,” Anwar substantiates, “It can only have the desired impacts if vertical growth is coupled with required environmental safeguards and proper growth planning principles and approaches”.

He suggests that we need to also promote ‘green buildings’ in the city that are energy efficient, use renewable sources and have provisions such as rooftop farms and gardens that can contribute to lessening temperature levels.

Other damage curtailing measures such as walking, bicycling, carpools should be encouraged.

“If the damage is not mitigated, reports predict that the overall temperature of the earth can rise by six degree Celsius by 2100,” forewarns Qadir.