Woman clears out roads for a critical patient during TLP protest

Dr. Bareera Bukhari is winning the internet with her courage after she stood up to the men who were blocking her way to the hospital 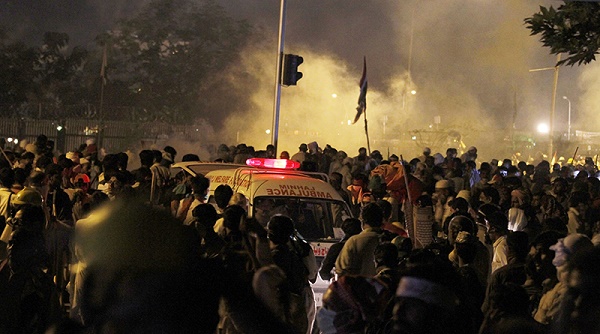 KARACHI: Pakistan’s major cities are undergoing road blockages and protests as thousands of members from TLP (Tehreek-e-Labbaik Pakistan) come out to the streets to protest against France. With the main arteries of several cities of Pakistan blocked, the situation has been rather challenging for people whose jobs surround saving lives. Recently, one such person i.e., Dr. Bareera Bukhari, was met with a road blockage as she was rushing a critical patient to the hospital.

Jibran Nasir shared the video on his Instagram. The doctor can be seen fiercely standing her ground and also handing it to the road blockers when someone from the crowd attempts to misbehave with her. “All your might is for women and children,” she shouts at them. “You too will have to go to the hospital someday,” she highlights to each and every person standing close to her. Towards the end of the video, men are seen trying to clear the path for her ambulance to pass through. A force to be reckoned with, Dr. Bareera is a loud and clear proclamation of what can be possible with the right attitude.

“Doctor stands up to #TLP goons to open the way for Ambulance,” wrote Jibran Nasir in his caption. He also lauds her courage and demands swift action from the government on the matter of the ongoing TLP protest. “The woman speaking in the video is Dr #BareeraBukhari who stood up to #TLP goons in Islamabad when she saw an ambulance carrying a critical patient stuck due to their blockade. She got a side of the road opened up for an ambulance. The courage which our State doesn’t seem to have right now.”