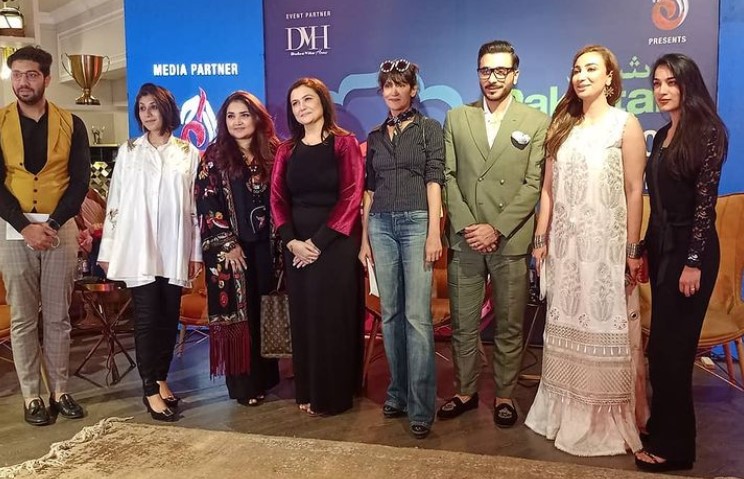 KARACHI: We reported earlier this year that Huma Nassr, the brains behind Shaan e Pakistan, is gearing up for the first phygital fashion summit. Expected to extend to Lahore and Dubai in the coming days, the Fashion Summit 2021 kicked off with its Karachi edition on Friday. It took place at the Dolce Vita Home outlet located in Clifton, Karachi. Featuring four panel discussions on subjects surrounding the world of fashion, the summit paved the way for much-needed conversations. Panelists and keynote speakers included designers, models, journalists and industry insiders while Anoushey Ashraf and Hira Hussain served as hosts for the evening.

First panel for the evening comprised Huma Adnan, Maliha Rehman, Humayun Alamgir and Sadaf Malaterre. They spoke about issues that confronted the fashion industry amidst the pandemic and how social media is changing the way we take it ahead. Designers Huma Adnan and Humayun Alamgir also highlighted how unconventional concepts can be given room while keeping up with the trends at the same time.

The panel was followed by a fashion presentation featuring Huma Adnan’s collaboration with refugee women for jewellery pieces.

The next session, titled Fashion in the Digital World, highlighted how boundaries have blurred with the advent of influencers, social media marketing and online shopping. The concept of originality has gone out of the window, as Tabesh Khoja put it. “What is original?” There are designers who have made a name for themselves in years and then there are 10 new options available online providing similar designs in less than half the price. Where does one draw the line when it comes to ethics and originality? While covering fashion what does a journalist chose? Credibility or what’s trending? Aspiring fashion designers need to be taught the difference between creativity and copying. These and other issues were put forth during the panel that concluded emphasizing the need to maintain quality over quantity, credibility over popularity and sticking to one’s core values despite the changing times.

The Business, Craft and Showmanship of Fashion was the topic of the next panel. It featured Fahd Nassr, Sidra Khalid, Mishayl Naek and Tanveel Azam. The panel spoke about how they can come together in different capacities and help each other grow. “This will help women connect,” noted Sidra Khalid, Manager Fashion Design at Gul Ahmed. Most discussions during the panels somehow incorporated the changing dynamics owing to the global pandemic as well as digitalization.

The final panel for the evening, Fashion: Now & Then, featured industry veteran Nadia Hussain, Umar Sayeed, rising star Mushk Kaleem, Imran Kureishi and stylist Amal Qadri while Hira Hussain moderated it. The panelists shed light on how some of the things such as pay scale haven’t changed much over the years unlike other aspects associated with the business. Mushk Kaleem pointed out how she set her boundaries and refused to do unpaid work since the day she stepped into the industry.  Nadia Hussain meanwhile highlighted the issue of ageism and that people in Pakistan are not accepting of models who are not as young.

All four panel discussions opened conversations that are confronting the local fashion industry in current times. While this may not lead to instant change, they could prove to be the first step in the right direction. With initiatives like these, one hopes the future of fashion will focus more on quality, transparency and acceptance. The woman behind the idea, Huma Nassr, could be seen on her toes throughout and certainly deserves appreciation for her efforts. The evening came to a close with a musical performance by Ali Tariq, who won our hearts with his Nescafe Basement track, ‘Mehbooba’, among other songs.