This is not how you apologize after disrespecting someone publicly 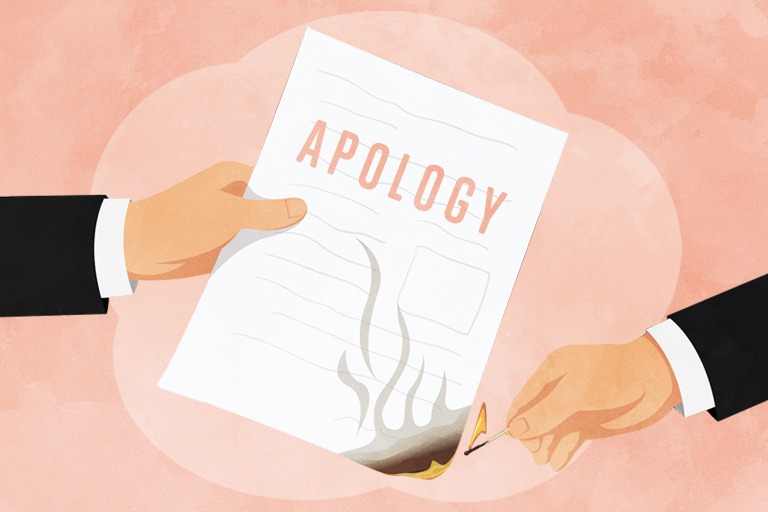 KARACHI: A recent video which made rounds on the internet offended many Pakistanis. In the video, two owners of Cannoli by Cafe Soul in Islamabad could be seen ridiculing their restaurant manager over his inability to speak fluently in English. Soon after the owners were called out for their behaviour, Cannoli issued an apology on their social media. Interestingly, the author behind the note does not seem to be sorry at all.

“We are saddened and appalled by the reaction of the people, how they have misconstrued our banter with a team member,” reads the post.

Dear Cannoli, a simple google search will tell you that ‘banter’ refers to an exchange of friendly or playful remarks between two parties. What was happening in your video was majorly a one way conversation where the manager was being questioned about his English speaking skills. The video did not witness the manager making any remarks towards you or raising any questions towards your education or language. Hence, there was no ‘gup shup’ going on as implied by your post. It’s almost like the time Mawra Hocane used the term ‘Lahori fun’ to describe street harassment. Clearly under such scenarios, only one party has all the ‘fun’ and the recipient is under attack.

Translation: we berate our staff privately (& record this for some reason). We pretend they don't mind because it allows us to continue, & they're stuck with us because the elite treat other classes like this everywhere basically, & they need money. Also, Pakistan zindabad. pic.twitter.com/ICYCpfaNkU

Let us suppose you honestly did not mean to cause any harm. Your apology still fails to convey your intention, if one can even call it an apology. You wrote “if anyone was hurt or offended, we apologise” immediately followed by a statement which shows that you are not sorry at all. “We are not required to prove or defend ourselves as kind employers,” reads your half-hearted apology, Of course, you are not entitled to answer anyone because you are the ones in power. The only thing you are entitled to is disrespect an employee, record it, share the video and sit back and watch the show. Your privilege allows you to remain unaffected by whatever the world says about you. Sure, people might talk about it for a day or two but then everyone will move on. You will continue to go on with your lives and beam at the success of your restaurant and praise yourselves for being ‘kind employers’ but what about your staff? What about your manager who will probably carry your words with him for the rest of his life?

– Said it last year, will say it again: English is not a parameter to judge intelligence. How disgusting of the owners, to put the manager on the spot, ridicule him, put his video up on social media- all for their own entertainment. #BoycottCannoli

“Our team has been with us for a decade, that should speak for itself.” Dear Cannoli, have you ever heard the concept of power? Or need? Does your team want to work with you or do they need to work with you? You made it clear in the video that you pay your manager a handsome salary. How many similar opportunities do you think he is going to get? Can he afford to leave this job, if he wanted to? Also, since when is time a measure of one’s respect or happiness? It’s like saying ‘if the person was being abused, why did they not leave earlier?’ Has this nation not seen people stay in abusive situations for years because they did not have the courage to speak up, or simply had no outlet?

Why was your manager’s language the sole topic of discussion anyway? Why was it the only aspect that you wanted to record when you ‘introduced’ him? Surely, his job is to manage the restaurant and not to address the public in the English language? Maybe you could have commended his will to learn the language, for honestly, how many of us would spend 1.5 years trying to learn a foreign language which most of our nation does not speak?

You know that song by Rihanna? Where she says “you’re only sorry you got caught”? That might be the perfect way to summarise your half-hearted apology. So yeah, apology not accepted!

A translation of that Cannoli Apology pic.twitter.com/FcG6AxQmn5