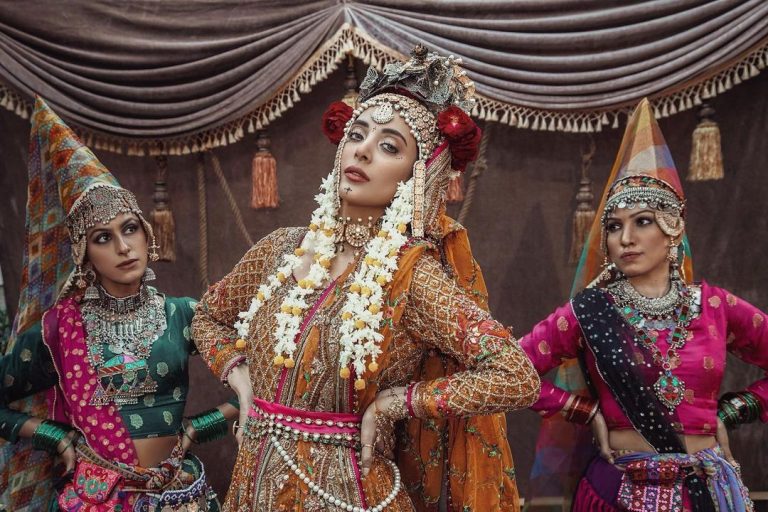 KARACHI: Fashion designer Fahad Hussayn, who declared bankruptcy earlier this year, seems to have returned to the world of fashion and couture. His latest work is not a typical clothing but rather a musical starring Urwa Hocane and Mikaal Zulfikar. Titled ‘Sao Banjara – The Grand Bazaar of Curiosity’, the 6 minutes long video tells the tale of a ringmaster and a crown jewel. An impressionistic play, the tale has been inspired by Iranian, Afghani, Persian and Rajhistani storytelling and designs, bridging together different art forms.

“A folklore tale that resides in the landscape of Nasarpur, a historical drama of the nomadic gypsies come to the lands of Jugnubad only to pay attendance of crown princess celebrations. Keeping in line with the dramatic mysticism; Wahab Shah puts forward the narration of the grandiose event where Mikaal Zulfiqar plays the ringmaster & Urwa Hocane plays the crown jewel of the curiosity caravan and both put forward a dramatic composition which becomes the source of an impressionistic play!” wrote Fahad Hussayn.

In the video, Mikaal Zulfikar is dressed up in a black sherwani and turban. Urwa Hocane, on the other hand, can be seen wearing a beautiful embroidered dress in rust, and lots of accessories including jewellery and a headpiece. “The tune of the song echoes through the clothes that have been created,” she shared on Instagram.

Fahad Hussayn has not only fulfilled the role of a designer but has also directed the musical in association with Wahab Shah. The production and cinematography for Sao Banjara is done by Film o’clock Studio while the art and production design is created by Namsa Abbasi.