Recently, the Institute of Business Administration (IBA) got the conversation rolling when it installed vending machines for sanitary napkins. But the topic is still taboo. 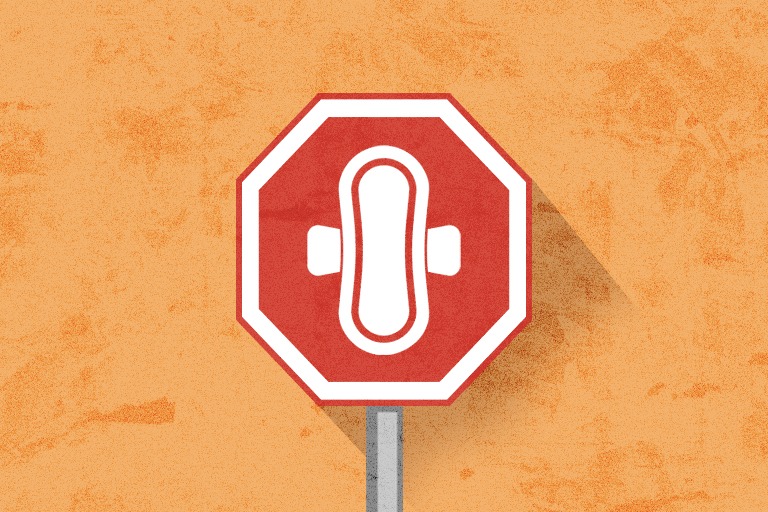 KARACHI: Simply put, feminine menstrual hygiene is a basic necessity for women, since menstruation is something they cannot really control unless they medicate themselves. Recently, the Institute of Business Administration (IBA), a university in Karachi, got the conversation rolling when it installed vending machines after a partnership with Butterfly Santex.

Santex Products and the IBA, Karachi signed an MOU under which the four newly installed feminine hygiene vending…

Posted by IBA – Institute of Business Administration on Thursday, October 29, 2020

These vending machines stock up on sanitary napkins for women. The move has been hailed by most as progressive, helpful, and revolutionary. The initiative will allow women to have more convenience on campus, where they can easily access safe and hygienic pads, at subsidized rates.

“We have all been that woman who goes after other women asking for pads during an emergency,” remarked Amna Kashmiri, a former student of IBA who pushed forward the initiative. She expressed her concern over the fact that since the subject is still taboo, it forces many women to unnecessarily be discreet about something that they cannot control, often contributing to a lack of awareness regarding various health issues women face. “We talk about periods as a taboo, not as a biological phenomenon,” she said. Kashmiri spoke about how the initiative means more than it seems: “It is not about a vending machine. It is about accepting periods as normal and something every woman goes through.”

Speaking about her journey with Cutacut, Amna Kashmiri expressed how the campaign had received a lot of support. After getting elected as the general secretary for IBA’s student body, Kashmiri prioritized female menstrual hygiene products being available to students. Initially, the plan started out with the placement of baskets holding female menstrual hygiene products. The rule was, if you take one, you replace it with one later on. The idea did not work, and nobody really put back a new pad later on.

Following this, another proposal was prepared. The entire campaign was not only put together by Kashmiri but also a teacher, Dr. Nida Aslam Khan who spearheaded the initiative alongside. All these proposals were sent to major companies that produce goods for female menstrual hygiene, such as P&G and Butterfly Santex. The latter called Amna Kashmiri for a meeting.

In the meeting, the company revealed how they’d like a student brand ambassador to spread awareness on the matter. Following this several seminars were held to raise knowledge on the subject and decrease the stigma around it.

“Students from different backgrounds study in IBA. So the initiative is not just for well-off students. We did a survey asking 500 boys and girls as to what price should be the most affordable for a sanitary pad. Although the prices will vary based on the size and thickness of the pad, they are still not as high as the market price. There is no profit. All that is earned through this is then recycled for more sanitary products.”

Achieving this milestone has been a great win for Amna and her team, “The Hygiene Initiative may seem trivial to some, but it is revolutionary for me. Revolutionary because there is no acknowledgment of the existence of such a phenomenon – menstruation (which, by the way, is a feat in itself). ”

Hoping more organizations will follow suit, she adds, “Through the initiative, we also aim to highlight that there is a dire need to make public places more female-friendly.”

Although many comments on IBA’s post were supportive, some still showed an unwelcoming image of how we view periods. The brown paper bag culture is perhaps here to stay a while longer than we want it to. We are a people comprising of creepy uncles who extract their lifeforce from questions like ‘roza kyun nahi rakha?” (why did you not fast today?) who at the same time comment “Astagfirullah” on any and every Facebook post showing an Aurat March slogan that promotes female menstrual hygiene, calling it “bayrahravi” and “behoodgi”. 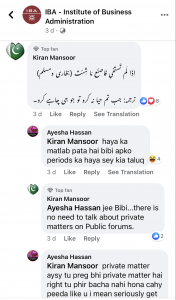 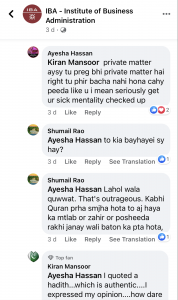 The comments on the post also mansplained suggesting that the university might as well add condoms in those vending machines. Other comments warned that this move supposedly steers our culture towards a forbidden direction. These responses effectively depict the polarised (and mostly negative) views our masses exhibit towards menstrual hygiene.

One often wonders why people tend to sexualize periods when the two are often very different things. While having sexual urges can be controlled, periods cannot be prevented and can often arrive earlier than their predicted time to a person who was unprepared for it.

Several studies have made the effort to study the phenomenon by exploring what girls think of their first period to find a reason behind why after this developmental stage we see a growing connection between menarche and sexuality. Some major research put forth physical evidence of pubertal developments; girls also become alert towards the growing attention other people give to their bodies, their breast growth, alterations in responses to their bodies, and behaviors, and this can often lead to discomfort. (Martin 1996; Summers-Effler 2004). Another thing to remember is that once a girl has her period, she is capable of conceiving too, and is now seen for this ability as well.

As human beings evolved, a sign of bigger breasts denoted better womanhood and more femininity. Since the understanding of motherhood was pretty basic in pre-history, larger breast size was considered more nurturing for the offspring. With this basic assumption, most men were drawn to women with bigger busts and that idea has probably been passed down, becoming more sexual in nature with time.

Hence, as a girl enters her puberty, her periods mark the onset of breast growth, a milestone that will turn her into a more ‘sexual being’. A society that views women majorly as sexual objects, starts to see the biological reason behind their bodily changes as sexual too. According to another research by Lee (2009), it was found that at the time of menarche, several participants did connect menarche to sexual maturation. One participant expressed she “felt disempowered by the way people were starting to look and relate to them”. This response suggests stark similarities to sexual objectification.

There is a strong restriction to the subject over keeping menstruation private, but barely anyone pauses to understand why the matter should be kept private after all? While many are quick to paint religious perspectives of the suppression, according to Islamic beliefs, menstruation has not been considered taboo at any point. It is safe to say (not really) that the projection of sexuality on menstruation is mostly motivated by cultural notions and it’s about time that changes.