The Weeknd makes a point at the VMA 2020 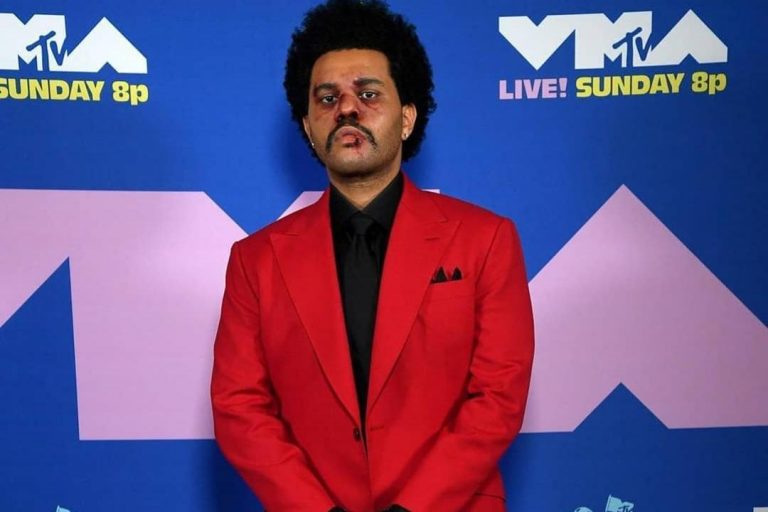 KARACHI: The Weeknd took home two awards this VMA. For best R&B as well as Video of the Year for his Blinding Lights. The ceremony opened with The Weeknd giving another top tier performance of the song from 1,100 feet above Manhattan. The Weeknd accepted the award with makeup that made it look like he’d actually been hit in the face.

His performance mimicked the deeply chaotic version of the actual song directed by Anton Tammi. His performance begins with him lying on the floor, his face bloodied and bruised. After he walks through a series of “Blinding” blue and orange light fixtures, he ends up on the edge of a 100 story high sky deck of one of Manhattan’s skyscrapers.

A helicopter keeps encircling the building’s parameters, adding more to people’s intrigue and the performance’s grandiose. Finally, the performance concludes with a dazzling display of a wall of fireworks that explodes on the Hudson River behind him.

However, as he accepts his award, after dedicating a bulk of his achievement to the people who helped make that video, including the director Anton Tammi, The Weeknd brings into notice a brief call to action for justice in the case of Jacob Blake and Breonna Taylor.

best part of the weeknd’s speech at the #VMAs pic.twitter.com/UzgV5eg7ZV

When collecting his award for the Best R&B at the VMA, The Weeknd said: “It’s really hard for me to celebrate right now and enjoy this moment so I’m just gonna say justice for Jacob Blake and justice for Breonna Taylor. Thank you.”

Jacob Blake is a 29-year-old who was shot in the back by the police in Kenosha, Wisconsin on 23td August, leaving his paralyzed from his waist down as a result. This was a clear case of excessive violent force and police brutality according to numerous activists and protestors.

Jacob Blake, a Black man who was shot by police in Wisconsin on Sunday in front of his three children, is reportedly paralyzed. @YoonjKim has what you #NeedToKnow about how voter suppression could impede the state from passing progressive laws to hold police accountable pic.twitter.com/iMwLWpq1oQ

On the other hand, Breonna Taylor, a 26-year-old, was sleeping in her bed when she was shot to death by the police in March. The police claimed they had obtained a so-called “no-knock” warrant. Similar killings, such as George Floyd’s and Tony McDade’s caused a widespread outrage against systemic racism, police brutality, and systemic injustice and violence this year. This protest took shape in the form of Black Lives Matter.

Read: Here’s why ’All Lives Matter’ is a misguided and offensive phrase

We are hoping more artists come forward and use their platform for social justice and change for the better, as we congratulate The Weeknd on his awards, as well as for raising his voice at the VMA 2020 for the right reasons.