Ankahi 2020 all set to hit the stage in October

In a recent press conference, director-producer Dawar Mehmood announced new dates of the musical which is an adaptation of Haseena Moin's script 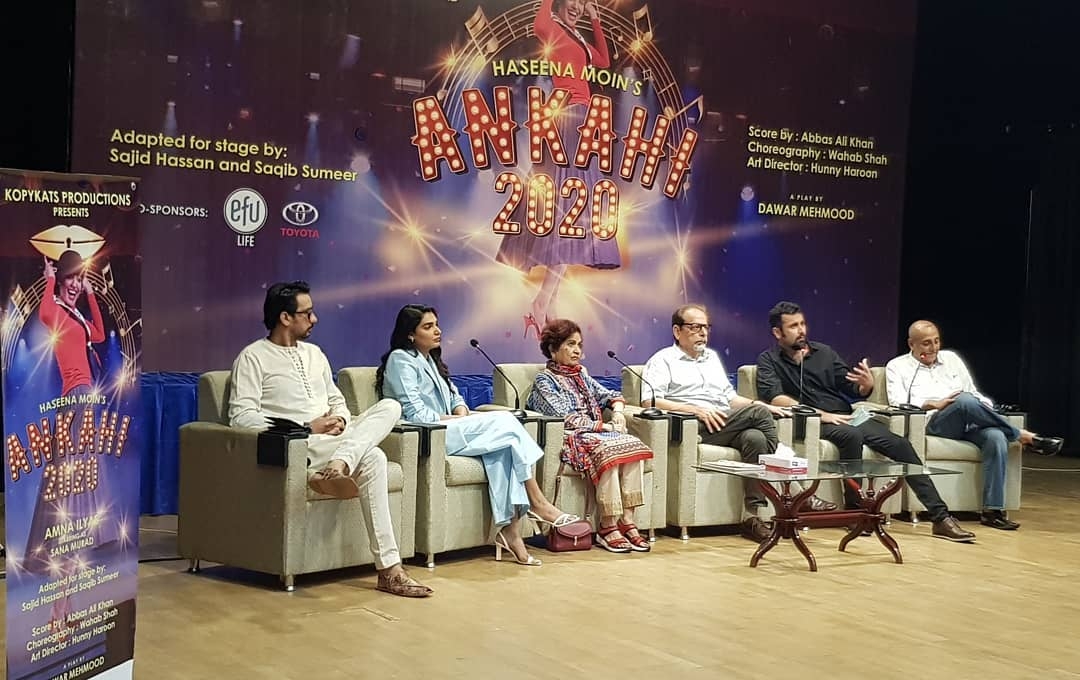 KARACHI: Earlier this year, theater director Dawar Mehmood of Kopykats Production announced his next production, Ankahi 2020. The upcoming musical is a loose adaptation of Haseena Moin’s acclaimed script Ankahi that she wrote in the nineties. Veteran artist Sajid Hasan and writer-actor Saqib Sameer have adapted it for stage. The musical will feature model-actress Amna Ilyas as the protagonist, Sana Murad. This and much more was discussed at a press conference held at the Karachi Arts Council earlier today.

Initially, Ankahi 2020 was scheduled to premiere in mid March but it was postponed due to the pandemic. It will now launch on October 20, 2020 as the lock down has ended and activities begin to resume. President Arts Council Ahmed Shah assured that they will take care of the SOPs. Media personnel who attended the press conference were also provided with masks.

“We had rehearsed for about three months already before Covid-19,” informed Dawar Mehmood. “Ankahi 2020 is Kopykats’ tribute to Haseena Moin. We have 11 actors and about 150-200 people including the entire crew. Wahab Shah will be handling choreography while Abbas Ali Khan has done the score.”

Speaking to Cutacut on the sidelines of the event, Dawar shared that he does not feel any pressure as far as the script is concerned. He explained, “Haseena Moin has approved of it. There are a lot of changes as compared to Ankahi. It is a new play with the same gist. A few characters and sequences have been used otherwise the rest of it is very different. I’ve experimented with some of the things for the first time. Set variations, costume changes will be without any wait for the audience. This is being done in Pakistan for the first time.”

Moving on, Haseena Moin added her bit, “It has been long since Ankahi was written for the first time. Dawar has adapted it according to present times. It has a message of love for youngsters. I hope it reaches out to fans of Urdu language and Ankahi.”

Iconic playwright Haseena Moin tells us how she feels about Ankahi getting a theatre adaptation. She has approved the script and is confident that director Dawar Mehmood would do justice to it. #Ankahi #Ankahi2020 #HaseenaMoin

There will be a few changes as far the cast of Ankahi 2020 is concerned. Actors who were onboard before Covid-19 hit the world may or may not be available. The entire cast was not revealed at the press conference today but we do know that Amna Ilyas will be making her theatre debut with it. She, as Sana Murad is all set to rock the stage. “I’m very confident about this play and I am sure it is going to be a massive hit. People will love it,” she claimed.

The TV play that was based on around 20-22 episodes has been turned into a 90-minute musical. “It was a creative process,” as Sajid Hasan put it. “Haseena apa‘s scripts have been very powerful and it is important to bring it back. Ankahi 2020 has those elements though it was a challenge to bring it to 90 minutes. Please don’t make comparisons with the original script/play.”

Netflix reveals the cast for its animated musical, Pinocchio

Hans Zimmer: The man made of Music