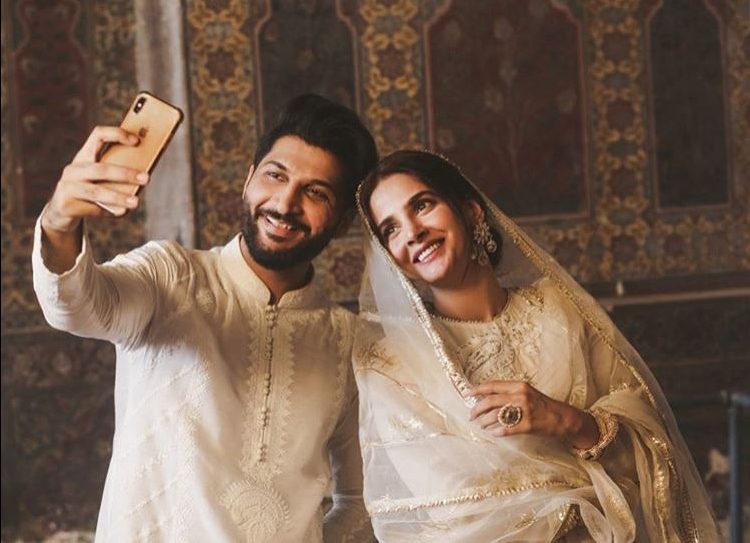 KARACHI: Saba Qamar and Bilal Saeed are under fire for shooting their recent music video Qubool Hai in a mosque. People have accused them of ‘misusing the mosque’ and harming the reputation and essence of a religious place by ‘dancing around’ and adding music to the parts for the mosque sequence. People have also jumped to quick assumptions that music must have been playing during the sequence was being recorded as playback.

A large number of tweets and statuses have been making rounds all over social media. While the considerable majority has chosen to call them out, a huge number of prominent figures have come out to support the two, and even point out the hypocrisy of the people in this case.

On August 8th, Saba Qamar took to twitter to clarify the matter as much as she could in the following tweets:

This is also the only sequence that was shot at the historical Wazir Khan Mosque. It’s a prologue to the music video featuring a Nikah scene. It was neither shot with any sort of playback music nor has it been edited to the music track.#SabaQamar pic.twitter.com/iYRswlLWLd

The BTS video that's been circulated on social media was just a circular movement to click stills for the poster of ‘Qabool’ depicting a happily married couple right after their Nikah. #SabaQamar

Despite this if we have unknowingly hurt anyone’s sentiments we apologise to you all with all our heart. Love & Peace! #Qubool releasing on 11th of August!#BilalSaeed #SabaQamar

However, the outcry was severe enough to cause the singer to step up and post a video. When the apology was not enough for his audiences, he even assured them of removing the Wazir Khan Mosque sequence from the video.

Prominent figures like Iqrar-ul-Hassan Syed, followed by Fahad Mustafa were quick to show their support on Twitter.

Iqrar-ul-Hassan was quick to point out that while people are calling out Saba Qamar and Bilal Saeed they also need to take notice of how wedding videos, coupled with music, are also shot in mosques.

Along with Iqrar-ul-Hassan there were others who also spoke about how mosques have been a hub for wedding photoshoots, something no one really cares about.

#SabaQamar it's not all about bilal & Saba
A singer & dancer
It's about all those ppl who just go to Mosque for their wedding shoots
For God sake stop it……
Government should ban over it😑
#MasajidAreNotCinemas pic.twitter.com/A3jhj4sykT

I did a few seconds video in Masjid Wazir Khan in which I was fully clothed and held hand of my fellow actor. Mullahs are sending me abuses and threats.

Where were these Mullahs when one of them sodomised a little boy in Gujrat mosque during Ramadan?

The aforementioned tweet is not from Saba Qamar’s official account, however, it shows a perspective being shared by many.

Have we ever witnessed the same hue and cry over raping a child in a mosque, the way we are experiencing over a shoot in a mosque by Saba Qamar and Bilal Saeed? Never!#SabaQamar#BilalSaeed

Finally, Jami Moor, a filmmaker who has never held back with his words took to Facebook to point out how we have set our priorities.

A huge majority of Pakistanis are actively calling out Saba Qamar and Bilal Saeed, with YouTube videos like these:

No one
Literally no one
Pakistani youtubers😂😂 pic.twitter.com/5FcsRYuxQC#SabaQamar

There is still a handful number of people who find all this petty:

God created more than 100 billion galaxies, each with around a 100 billion stars. Waits 13.4 billion years before creating Saba Qamar on a far away planet, again one of 100 billion other humans he made. Saba danced in a masjid yesterday. Now God is mad at Saba Qamar.