For their first Pakistan tour, Cyminology performed in Karachi, Islamabad and Lahore 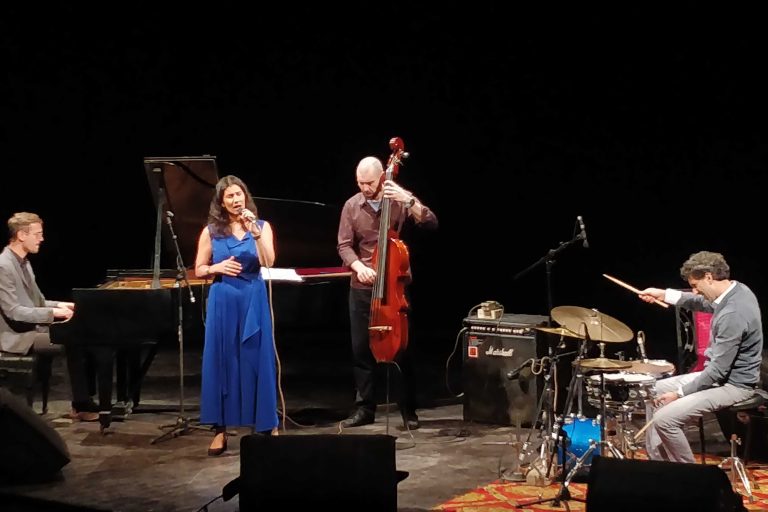 KARACHI: The Arts Council came alive with the sounds of Berlin-based jazz quartet Cyminology Thursday evening. The show, arranged by the Goethe-Institut Pakistan in collaboration with the Embassy of Germany, saw the four-member group take the stage for an hour-long performance.

Cymin Samawatie (singer, composer) is the daughter of Iranian immigrants to Germany, Benedikt Jahnel (piano, composer) was in France and raised in southern Germany, Ralf Schwarz (double bass) is from northern Germany and has collaborated with Cymin on various projects since 1993, and Ketan Bhatti (percussion) was born in New Delhi and moved to Germany very early in his life.

One could instantly hear the band’s Persian influence since Cymin sings in Persian. They chose Persian poems, even sang some versus from Rumi’s Masnavi, and for a special surprise for the audience, the quartet also sang in Urdu. Speaking to Cutacut, Cymin revealed that the Goethe Institut sent over a book of Faiz Ahmed Faiz’s poems and she chose Aaj Ki Raat. even though it was her first time singing in Urdu, Cymin claimed it wasn’t that difficult because Urdu and Farsi are very similar.

Towards the end, Cymin also shared another little heartwarming moment with the audience when she  told everyone that Ketan was especially excited to be in Pakistan because his grandmother is Punjabi and he only recently discovered that she was originally from Lahore.

The performance was met with a standing ovation, understandably so. The soft vocals combined with contemporary sounds were definitely a treat for the audience and offered something very fresh and new to the Karachi audience.

Awami Theatre Festival 2020 to commence this week at Arts Council

Ankahi 2020 to premiere at Arts Council on 1st November