Could a leather-jacket clad woman truly be representative of the masses in a country like Pakistan? 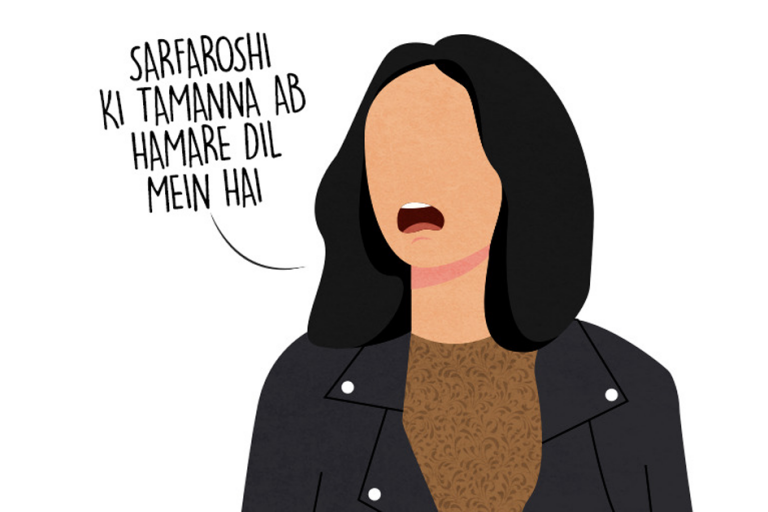 KARACHI: We’re quick to dismiss fashion as frivolous, and a privilege only a certain section of society can enjoy. But the truth is, fashion makes up a huge part of who we are, whether we make conscious decisions of what we put on our back, or not.

An iconic scene in Devil Wears Prada illustrates this well. Andy, (played by Anne Hathaway) wants to be serious journalist but takes up a fashion editor’s assistant job simply to get her foot in the door to other, more serious publications. She doesn’t think fashion or clothes are worth the time or effort, and, therefore is always dressed poorly. In one scene, when a couple of fashion stylists cannot decide between two very similar looking belts, Andy scoffs because she can’t tell the difference between the two. Her boss Miranda Preistley (played magnificently by Meryl Streep) jumps in to remind Andy that fashion starts from the very top, from designers like Oscar De La Renta, and then those trends trickle down to the department stores and you have smaller designers making first copies or simply copying the designs. The famous red sole of Christain Louboutin is one such example.

For instance, when Maryam Nawaz was arrested in 2018, she chose to wear Gucci slippers that became almost as viral as the arrest itself. Those slippers became viral because they represented the problem: Maryam was being arrested for corruption charges along with her father, and she was making her way to prison wearing shoes that cost $650, which around the time came close to Rs70,000. In a poor country that has been robbed left and right, here is a politician, wearing shoes none of us regular folks can even dream of possessing, while being arrested.

But the virality didn’t end there. Those slippers were copied by smaller brands and sold at nearly one fifth the cost. So, one can say that nobody cares what Maryam Nawaz wore that day, but it’s not true. It’s not simply about judging someone’s sense of style, it’s also about what the clothing item means, socially and politically.

And that brings us to Arooj Aurangzaib and her black, leather jacket. Aurangzaib is a graduate of Punjab University and was seen chanting slogans in a video that went viral earlier this week. In an effort to mobilise people for the upcoming Student Solidarity March, Aurangzaib along with other protesters, was seen chanting a verse from a poem by Bismil Azimabadi.

Read: Here’s what you need to know about the #StudentSolidarityMarch/

There are several reasons why the video went viral. Firstly, watching the video will definitely give you goosebumps; you’ll feel the winds of change – students mobilising and becoming more political, asking for their rights. It’s refreshing to see younger people becoming more active with their politics and their activism.

But there’s more to it. Yes, there are others in the video, but heading the protest is a woman, dressed in a leather jacket (a piece of clothing more commonly seen on men in this country), chanting confidently amongst a huge crowd of people. Something about powerful women always manages to capture our attention, especially one who is unconventionally dressed.

And let’s be honest, she is unconventionally dressed. A majority of women in Pakistan wouldn’t wear a leather jacket, especially the kind of tapered design Aurangzaib has donned over her otherwise traditional kameez.

Twitter erupted in a debate because of that jacket, with one side assuming Aurangzaib and her companions to be from the elite class, while others rushed to defend her  background and her fight for equality. The argument perhaps came down to this: Could a leather-jacket clad woman truly be representative of the masses in a country like Pakistan? And the argument stemmed from the fact that these students seem to be asking for student rights and a ‘surkh‘ Pakistan (meaning a socialist/communist nation). Could someone, who doesn’t look like she belongs to the worker class, be a true representation of the movement?

In my opinion, the scrutiny is a gendered one – somehow, we are always very critical of women and what they wear. Whether it’s the royal visit which saw Prince William and Kate Middleton coming to Pakistan (every headline was about what Kate wore and what it meant but nobody was commenting on Prince William’s clothes) or the Sudanese protester Alaah Salah, whose white thobe and circular gold earrings, called fedaya, became a topic of conversation all over the world. Even in the case of Maryam Nawaz, her display of wealth is constantly critiqued as opposed to her male counterparts in politics and it’s done on the basis of what she wears. Even Imran Khan’s wife is critiqued heavily for choosing to completely cover her face. Mahira Khan was also attacked for wearing a revealing dress while smoking next to Ranbir Kapoor. And how can we forget Qandeel Baloch in this conversation?

An artistic rendition of the now-iconic photo of Sudanese student and protester Alaa Salah taken during anti-government protests in Sudan.

The Arabic written translates to "A woman's voice is a revolution." [Artist unknown] pic.twitter.com/DhqPRhySig