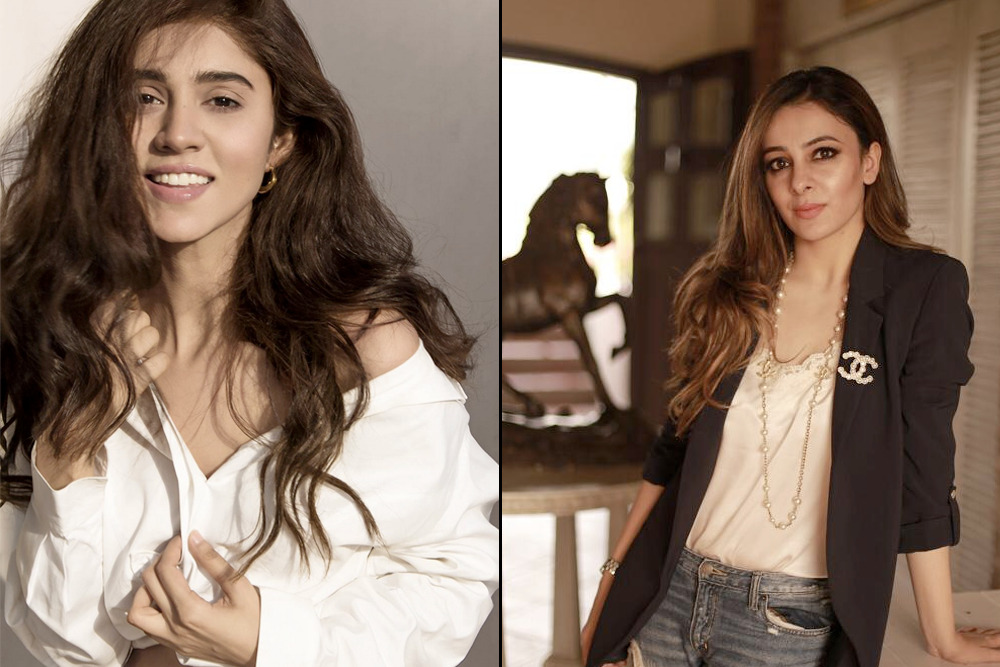 KARACHI: Pakistani model Marvi Shabbir uploaded on Tuesday a video of herself explaining her allegedly horrifying experience of working with designer Zainab Salman. In her video, she claimed that the brand treated her inhumanely by not providing her with food and failing to pay her for the work that she had done due to an argument that occurred during the shoot.

The model also shared more details about the incident in the following posts to give a clearer picture of how the fashion industry views models as mannequins and disrespect them by behaving in inappropriate and unprofessional ways.

Her posts caused outrage, with many demanding justice for the way she was treated and some suggested that the alleged aggression that the designer showed Marvi was out of line.

Zainab Salman is the prime example of people who misuse their authority just because they think superior of themselves.Are you above humans and humanity?
A big NO. #MarviShabbir

Nobody is allowed to humiliate other person especially if someone is working for you. #MarviShabbir

Just watched model #MarviShabbir video about the disgraceful treatment meted out to her by designer Zainab Salman. It’s unethical to demand extra work w/o prior agreement, humiliate the model if she refuses & then not pay her the full amount later. Shameful

The overwhelming response online prompted the designer to release a video detailing her outlook on the situation, claiming that Marvi’s accusations are false and an attempt to cyber-bully her. In her video she explained that the model was in fact the unprofessional one as she did not make it to the shoot on time and caused them to suffer great losses due to the delays that she initiated. The video also included screenshots of the conversation between the two which showed her being late but failed to prove that Zainab was innocent to the act that she was accused of. The Lahori designer proceeded to share more videos on Instagram whereby a short recorded conversation between Zainab and Marvi about the incident was submitted as proof on Zainab’s behalf.

Dear All, There have been multiple conjectures and opinions with regards to me & my brand, Zainab Salman. It has been a heart wrenching experience having had so many accusations towards my integrity, and I would like you all to acknowledge what I have been put through on unprofessional grounds! We as a society end up being extremely judgmental by knowing the half truth and today I will speak only the truth and what happened in reality. I hope you understand and empathise with me. #StopCyberBullying #JustPracticesAtWork #IStandForYou

It is very easy to make accusation and damage someone’s reputation but I’ve decided its time that I take a stand and end this trend of cyber bullying.

I don't believe in throwing false accusations nor do I rely on deception to prove a point or to seek attention. The truth always triumphs over falsehood. I stand against this trend of cyber bullying and harassment. I'm sharing all the evidence which negates her narrative of baseless allegations for the people to see and decide who is at fault. Evidence 1: Marvi claimed that she came out with the video containing false allegations by her as she had no option since Zainab Salman cancelled her calls, denied payment and showed derogatory behaviour. But the first two audio recordings show that the designer took it upon herself to call the model and sort the matter out in person the same day the shoot had ended. The audios also negate the model’s statement “it’s not about the money” as she was continuously THREATENING the brand of a social media video despite the fact that she was assured that her payment will be made. The last few seconds also show that she admits that her staying awake for 2 nights played a role in the situation. Evidence 2: Marvi claimed that she was abandoned in an ISOLATED place. She claims that Zainab Salman said “I will not drop you”. But this third video shows our manager arranging a drop off for Marvi by requesting the videographer politely. The brand team had to stay back to wrap the production on location as it was halted midway. Evidence 3: Marvi committed to completing 6 outfits for which the total quote was 72K. However, she refused to continue shooting during the 4th outfit. Thus initially a PAYMENT of 36K was made to her by the brand management. When Marvi showed concerns regarding not receiving payment for the 4th outfit even though it was left incomplete; you can see that our management was not hesitant about authorising the additional payment and she was assured that it will be made. But before we could process it on the next banking day she started #CYBERBULLYING. #STOPCYBERBULLYING

Online users were split after Zainab’s posts with some suggesting that these posts cannot be used as examples of evidence and are ‘baseless’ whereas others expressed that they believe the model was trying her hand at gaining public attention with her public allegations.

In a recent interview with Images, Marvi said that the evidence shared by Zainab was “manipulated” and the recorded conversation that were shared in such a way to make Marvi sound “threatening”. As for the food that Zainab claimed was available throughout the shoot, Marvi said that it was “obviously prop for the pictures”.

The makeup artist on the set of this shoot, Nauman, held the position of an eyewitness to testify that Marvi’s claims are true when he posted the following on his Instagram story: 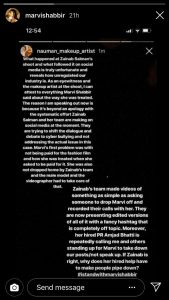 The makeup artist also spoke to Images stating that the brand was highly unprofessional and made Marvi and himself wait 45 minutes outside of the venue before the rest of the team could arrive. He further added that they did not display the decency to open the studio so that the two could sit and wait inside. However, to Zainab’s defense, the photographer on the set, Zahra Sarfaraz, negated all of Marvi’s claims by recalling the incident on her Instagram story claiming that all the people there had access to food.

Those who are alleged victims to Zainab Salman’s treatment say that they have nothing to gain and hope to gain nothing by sharing their experience with Marvi explaining that she hopes that the industry changes its perception of models and treats them with the respect that they deserve.