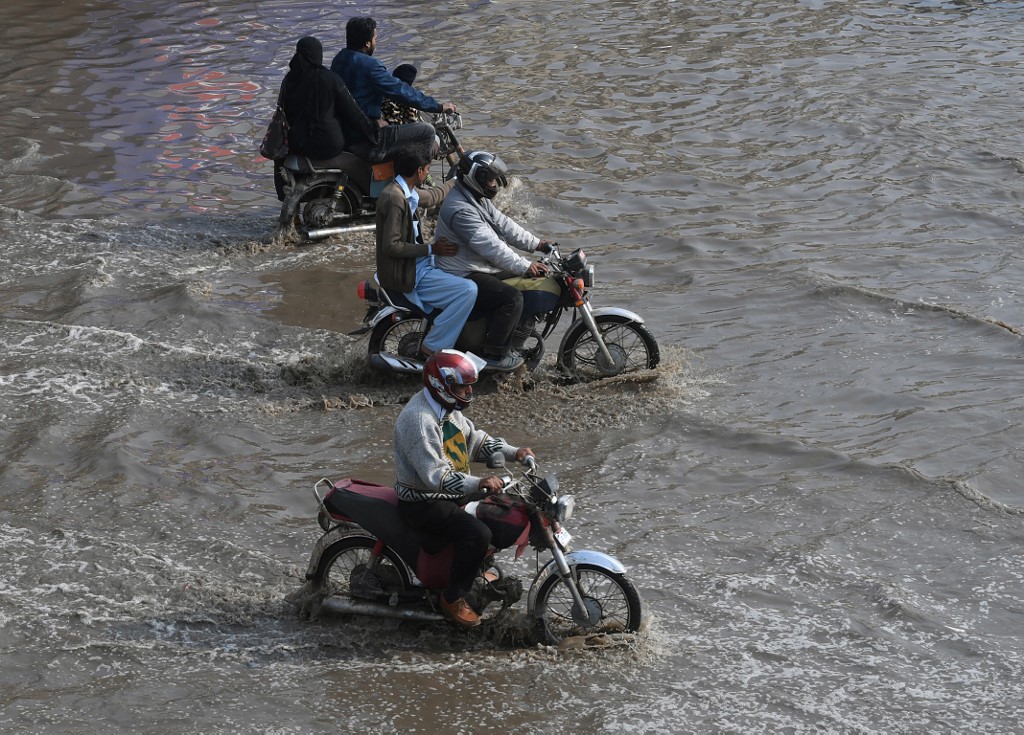 KARACHI: The past two days of heavy rain have proven to be incredibly burdensome for the city’s landscape. The city has been overly stressed via electricity, sewerage systems, disintegrating roads and garbage mismanagement. 2014 reportedly saw 10 people in Karachi being electrocuted to death whereas these numbers have seemingly increased this year with 11 people being killed due to rain related incidents, according to Dawn. It is evident that precautionary measures be taken to handle the poor management systems that have caused these issues.

Many users have taken to Twitter to voice their concerns over the need for proper drainage systems and safe electrical systems/poles that won’t prove as a threat to pedestrians. Many users also recorded exploding poles and wires catching fire around different parts of Karachi, urging K-Electric to take action on these deeply concerning matters. Others have expressed their frustration over the power shortage that they have been experience in their area of residence, with some stating that they have not had electricity since more than 12 hours.

Do you bloody realise that there is no electricity since 1300 hours and it’s been more than 12 hours. Where the fuck these teams are working since 12 bloody hours? Why your phones aren’t responding? What the hell is going on so far @KElectricPk?

Karachi’s Khayaban-e-Shamsheer in DHA phase 5 after the rain today. The entire ‘posh’ housing society has no proper drainage system, no sidewalks, no respect for the natural ecology of the city, no sewage treatment plants and no water supply to many of the houses. #KarachiRain pic.twitter.com/ldQ7yVLisr

Dear @KElectricPk its alomost 14 hours now since we dont have power. Any luck?

Not to rain on your parade, but how can anyone in good conscience enjoy the rain in Karachi knowing that the majority of the city lives in informal housing ?

Power out since 9am, 29th July and it’s 4:19am, 30th July. Nearly 24 HOURS!!!!! What could possibly be that wrong with electricity supply? @KElectricPk

I've managed to avoid the impacts of the #KarachiRain by cleverly staying in Melbourne.

Karachi-ites when it first starts to rain: 'Hooray!' 'Allah ka shukar hai!' 'How romantic!' 'Chai, pakora time!'
Karachi-ites after it rains for more than 15 minutes and they realise the city has no infrastructure to deal with this:
😳😭😳😭😳😭😳😭😳😭😳😭😳 #KarachiRain

Sindh government has fucked up this city so bad that this regular rain seems like a hurricane, schools and collages called off, power have gone with first drop of water, flooded streets!#KarachiRain

Every school in karachi must cover electric poles near their schools due to possible rains in next few days. This is acutally the duty of #KE but those irresponsible culprits are waiting for incidents to be happen. @KElectricPk #KarachiRain pic.twitter.com/gCsMc29N4U

In an attempt to pacify concerned citizens, K-Electric posted a video detailing the precautionary measures that should be taken to ensure that no one is harmed via open wires or electricity poles on Twitter. They also updated that the electricity in some areas has purposely been switched off to avoid any ‘serious incident.’

Be careful during the #Rain pic.twitter.com/u1fxiHijrw

Karachi Power Update (2/3)
Nazimabad 2 & 4, FC Area, Moosa Colony, Banaras, areas of Defence, Korangi among others. In few cases, power supply to kunda-infested and low-laying areas has been deliberately turned-off as a safety precaution to avoid any serious incident.

Karachi Power Update(3/3)
In several areas the accumulated water and urban flooding caused by continuous rain have been a challenge to the restoration efforts. We are grateful for your patience and regret the Inconvenience caused.

Heavy rainfall in Karachi has yet again proven to out-do the city and has illustrated the inter-connectivity of poor infrastructure issues with one another i.e. due to poor drainage and road systems there is flooding and due to poor protection of electrical poles outside peoples homes there are exploding wires and increased chances of electrocution.