New Zealanders stood in solidarity with the Muslim community, adorning headscarves and embracing each other 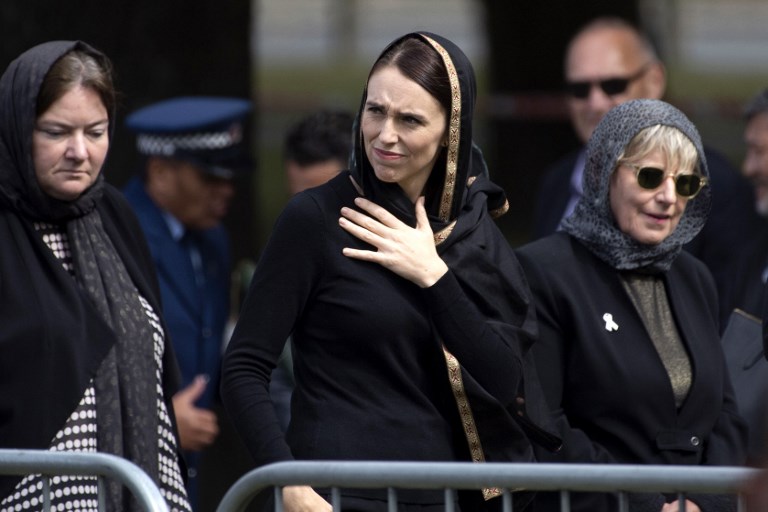 KARACHI: A week after an act of terrorism at Al-Noor mosque of Christchruch city in New Zealand killed 50 people, Azaan for Friday prayers was broadcast across New Zealand a week after the shooting. This was followed with two minutes of silence in public gatherings in Auckland, Wellington and other cities. New Zealand Prime Minister Jacinda Arden along with survivors of the attack stood in solidarity at a park opposite the ill-fated mosque.

“New Zealand mourns with you. We are one,” Prime Minister Arden said in a short speech, AFP reported.

The country is still reeling in shock following the shootings by alleged suspect Brenton Tarrant, a 28-year-old Australian. Exactly after a week since the shooting, burials were carried out with 26 people laid to rest, among whom eight were Pakistanis.

According to Foreign Office spokesperson, Dr Mohammad Faisal out of 5000 people who attended the funerals in Christchurch, 1500 were Muslims. More than 20 family members of the victims went to New Zealand from Pakistan to attend funerals.

The funeral was attended by more than 5000 people, of which there were about 1500 Muslims, who came from all over NZ. One remaining Shaheed Syed Areeb Ahmed would be repatriated to Pakistan in next few days. His family is being kept informed. 2/3 @MFATgovtNZ

Difficult to put into words the scenes we saw today as New Zealand marked the one week anniversary of the #Christchurch mosque massacres. For me it’s this photo I took shortly after prayers ended — to me it sums up how the nation has responded to the gunman’s race hatred 🇳🇿 🕌 pic.twitter.com/2KBiYXvaXu

Women across the country wore headscarves to show unity with Muslim women.

Major local newspapers and channels broadcasted special tributes. The front page of Christchurch daily The Press had the word Salam printed in Arabic along with the name of all 50 people who lost their lives in the shooting. The moment of silence was also observed across numerous television channels and local media websites, according to AFP.

A local New Zealand daily, The Press dedicates front page to the victims of the #ChristchurchMosqueAttack. The word ‘peace’ written in Arabic script followed by the names of the victims. pic.twitter.com/jFizvoUGgB

Prime Minister Jacinda Arden’s government on Thursday banned semi-automatic weapons, assault rifles and high-capacity magazines. Gun parts that are able to modify weapons and make them deadlier have also been banned.  According to AFP, New Zealanders in hundreds have been contacting authorities to turn in their guns hours after the government announced the ban.