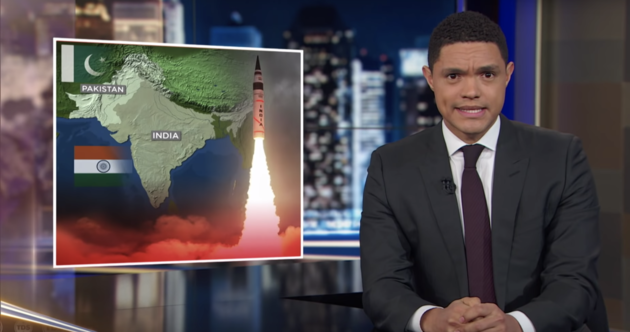 KARACHI: Comedian and host of The Daily Show Trevor Noah mocked the recent India-Pakistan tensions in a recent episode.

During the segment, the South African comedian said he hopes India and Pakistan don’t go to war, but if they did go to war it would be the most entertaining war of all times. He then went on to mimic the Indian accent while saying, “Time for you to die” followed by a Bollywood-inspired tune of gunfiring and chanting. “It would be the longest of all time. Another dance number?!”

Needless to say, this did not settle well with many viewers, you did not find it funny, rather racist, insensitive and trying to make a mockery out of a situation where two nuclear-armed nations are on the brink of a war.

It has been a tough week for people of both India and Pakistan. On Tuesday, India struck and dropped its payload in Pakistani airspace. The next day, Pakistan struck back and brought down two Indian jets and arrested a pilot of Indian Air Force. It has been a tense atmosphere so much so that all flights were cancelled and Pakistani airspace cleared. In addition, it was feared that a missile attack might rake place overnight.

People, on both sides of the border, took to Twitter and called out Trevor Noah over his racist, insensitive stunt:

I’ve really always liked ur humour @Trevornoah. Really have. And we In India have a good sense of humour. This still crosses a line. We’ve lost our forces to terror attacks. Somehow it doesn’t sound as funny. #JustSaying #TheDailyShow pic.twitter.com/qknBmi6qfd

What a shame, @Trevornoah you had to fall back on racist tropes to mock conflict and the people involved in it in this region. https://t.co/DsDdL2mtKy

Nah this isn't funny @Trevornoah poor sense of humour on this one! https://t.co/j9fpeYFWYq

What kind of an ignoramus do you have to be to call a War between India and Pakistan "entertaining"? #TrevorNoah pic.twitter.com/SNsLhUYOst

Just saw the Trevor Noah bit on India-Pakistan. India = not amused. "Not only did he fail to understand the severity of the situation between the two neighbouring countries, Noah took racist and stereotypical jibes at the Indian military forces."https://t.co/F0FFdUTQXT