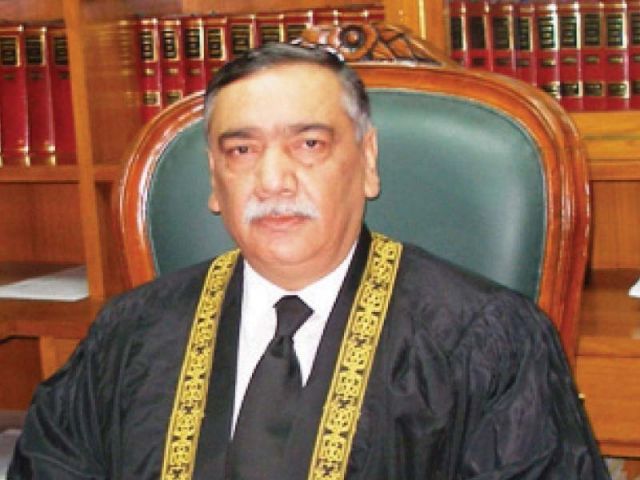 KARACHI: Justice Asif Saeed Khosa, who was part of the three-judge bench of the Supreme Court of Pakistan that heard the landmark blasphemy case against Aasia Bibi, has once again inspired awe judicial prose in the final verdict of Aasia Bibi’s case.

The SC judge, who will replace the current Chief Justice Mian Saqib Nisar after he retires in January next year, sure is fond of quoting great literary figures in his judgements.

In the latest historic verdict which was in favour of the Christian woman, he quoted William Shakespeare in his additional notes to drive the point home and it’s quite fitting.

“It is ironical that in the Arabic language the appellant’s name Asia means ‘sinful’ but in the circumstances of the present case she appears to be a person, in the words of Shakespeare’s King Leare, “more sinned against than sinning”

Justice Khosa went on to say that Aasia, who has been incarcerated since 2010, has been wronged. The court acquitted the Christian woman after giving her the benefit of doubt, given that the prosecution failed to provide sufficient evidence against her.

This was not the first time Justice Khosa borrowed a classic quote from literature line in his judgement.

Earlier, when Panama Case verdict was announced, Justice Khosa used the reference of 1969 novel by Mario Puzzo titled The Godfather.

“The popular 1969 novel ‘The Godfather’ by Mario Puzo recounted the violent tale of a Mafia family and the epigraph selected by the author was fascinating: Behind every great fortune there is a crime. The novel was a popular sensation which was made into an acclaimed film. It is believed that this epigraph was inspired by a sentence that was written by Honoré de Balzac [French novelist and playwright]… as follows: (The secret of a great success for which you are at a loss to account is a crime that has never been found out, because it was properly executed). It is ironical and a sheer coincidence that the present case revolves around that very sentence attributed to Balzac…”

In 2012, while announcing the verdict against then prime minister Yousaf Raza Gilani in a contempt of court case, he adapted Khalil Jibran’s poem Pity thy Nation in his verdict.

“In the context of the case in hand I am reminded of the following unforgettable words of Khalil Gibran that paint a picture which unfortunately appears quite familiar: