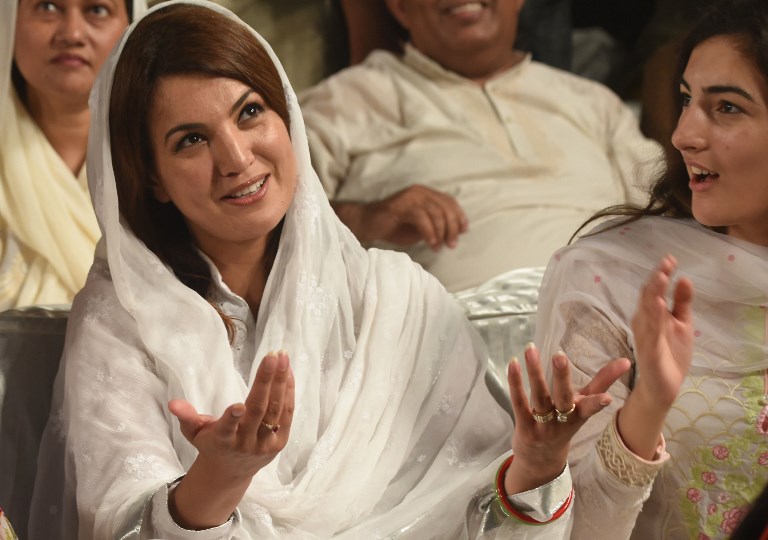 Reham Khan is pictured during her former husband’s campaign meeting in Lahore in 2015. PHOTO: AFP

KARACHI: A video clip showing journalist and Imran Khan’s former wife Reham Khan being aggressively questioned (read: harassed), by the person behind the camera, is making the rounds on social media. The video shows Reham in the middle of filming in Kent, UK, when she interrupted with a barrage of questions and moral policing. The woman behind the camera, whose identity has not been disclosed, repeatedly asks Reham why she’s jealous of prime minister to be’s current wife, Bushra Maneka, and refuses to let her answer.

Reham remained quite calm and kept her cool while the woman behind the camera continued to spew hate at her.

Reham Khan handles v well a very obnoxious PTI supporter in the UK who is basically stalking and filming her & her son — would be within her rights to report this woman for harassment pic.twitter.com/1DtAjVIKRZ

In fact, at first, she even tried to answer her questions and reason with her. When she couldn’t deal with it anymore – which is still quite a dignified reaction because it were me in her situation, I would’ve lost my shit tbh – she politely said: Allah apko hidayat de (May God give you guidance).

But the woman just went on and on.

Now here’s the thing: you may dislike Reham, you may disagree with her politics and her decision to publish a tell all book about her ex-husband, but that still doesn’t make what’s happening in this video, which can be amounted to harassment, okay.

Ambushing a person, filming them, openly insulting them like this is just wrong. Especially if they’re speaking to you in a kind manner.

In recent months, Reham has garnered a lot of criticism from the country’s intelligentsia for her tell-all memoir. But even those who called her out on it have come out in her defense over the harassment she faced.

It's a free world, everyone has a right to say or write what they want to (other than incitement to violence).

Hate what Reham Khan wrote in her book with the help of her son, but there's NO need to verbally harass them in a public place.
This is how things get out of hand. STOP

All the video did was made me a fan of @RehamKhan1 for being so patient & tolerating troll harassment – the PTI supporter should spend less time harassing another woman & stop leader worshipping someone who has been aggressively against women rights & pro Taliban justice. https://t.co/BAEEPcXKQB

This trolling of anyone is shameful and obnoxious. Good on @RehamKhan1 for keeping it dignified https://t.co/1lLwkey9AX

Saw full clip of a woman harassing @RehamKhan1 in a downright disgusting &vile manner. Kudos to Reham for keeping poised & dignified even though was provoked with every insult possible. Feel bad for her son, not fair for any son to witness his mum being attacked this way.

Absolutely appalling behavior. U can dislike someone and disagree with them but when u start bullying and harassing, u certainly have lost the plot and have crossed all boundaries of obnoxiousness. I give credit to Reham Khan for keeping her cool. https://t.co/YUxwAlBVod

The woman harassing @RehamKhan1 is an embarrassment to women. Exactly the kind of PTI cult followers who will tweet to Jemima all day to come to PK, and tell Reham her chapter is closed. The UK has harassment laws, I sincerely hope she is refrained from ever doing this again.

I may not agree with @RehamKhan1 on so many things but I strongly condemn the attack on her by obnoxious stranger . Why going to someone and questioning them when you are not even a journalist .Its harassment/ threatening. Shame on everyone who promote this kind of behaviour.