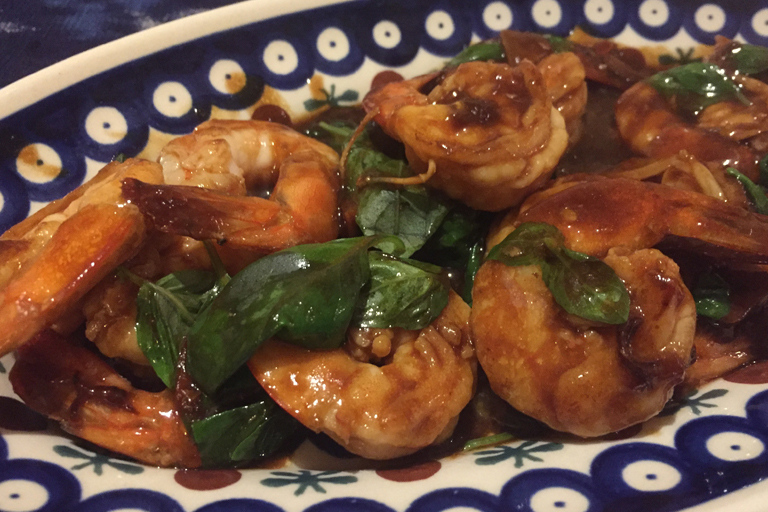 The harbour was frantic so early in the morning; a rapid change from the relative peace that had taken over the last month. As she stepped onto the bridge, she took a second to take in the hurried scene in front of her. Dawn was just breaking from the cloud scattered sky and there looked to be a few hundred men scurrying around the marina, dragging equipment and loading cases and boxes on to their respective prawn trawlers. Within that short three second span, she was pushed aside with brute force and yelled at, “Get outta the way!”

She wasn’t quite sure how she ended up in this situation but she desperately needed the money and one random encounter led to this opportunity. Now she’ll be stuck on a boat for the next 10 weeks with a group of 6 men, and thankfully one other female.

With the boat name scrawled on a torn piece of paper, The Sanremo, she started walking, unsure of how she would even find it amongst this productive chaos. Luckily, before she went too far, she heard her name and whipped around to find Lucy, the other woman she’ll be working with on the deck of the boat.

As she threw her duffel bag on the deck, Lucy introduced her to the others that were around. A quick introduction consisting of names she instantly forgot as she hopped on board. “Am I late?” She worried this would further impact the impression they all had on her, it wasn’t easy convincing the boss to let her in as the cook for this season of prawn fishing, but they were desperate and she got the job.

In her thick Australian accent, Lucy reassured her, “Ah, don’t worry, you’re on time, two of the other guys haven’t shown up yet.  Don’t be nervous, you’ll get a hang of everything in no time. Come with me and I’ll give you a quick tour.”

After pointing out the basics on the main deck, they climb down to the living quarters and instant regret flooded her decision to take this job. Ten weeks out on the water in this? It was small, musty and everything seemed damp and salty. One tiny bed was all the privacy she was afforded, and the kitchen space to create three meals a day seemed nearly impossible. Not to mention it was freezing as the lower level was directly above the freezers needed to store all the prawns.

Heading back up, they ran across Pete, the boss for their journey. “There you guys are. How’s it going Cassie? You ready to hit the water?” He was a big guy with years of experience etched on his face. With that height she questioned how he even slept on the tiny beds that filled up the cabin. Within a few days she learned he hardly slept, constantly working the nets and processing the prawns that came through. She also learned her job as a cook was not their priority on the first week. Everyone was a deckhand with a ton of prawns being caught on a daily schedule.

She had no difficulty imagining it wouldn’t be an easy experience. But the reality of the situation was something beyond her imagination. The first week felt like torture at times. Getting past the early seasickness was reconcilable compared to the grueling work schedule. Everyone was mentally and physically exhausted after seven days of the same cycle. With little sleep, the act of picking prawns, boxing and sending them to the freezer had lost all of its initial charm. The allure of cooking on a boat was thrown away as they would just heat up canned food and shovel it down their throats before heading back to the conveyor belt of endless prawns.

This was not what she had expected or had even been briefed about. By the sixth day, one of the deckhands quit, complaining of skin rashes and irritation from being out in the sun all day. It took every ounce of whatever will power was left to stay on board and not flee with the quitter. To regain her self of control, she allowed a brief but intense sob in the bathroom. The only true private place for the time being.

The only thought keeping her there and sane was the sole fact that the more prawns caught, the more money they will each have individually made. It was a dilemma conundrum, wishing for less prawns to be caught to allow more time for sleep versus getting large hauls to benefit from a bigger payout at the end of this never ending sore.

Before it got better, it got much worse. The fear of big crashing waves became an actuality. Being thrown across the deck provided bruises the size of footballs on her body. She had hoped this would be a respite from the work, but the nets were kept out and the hauls were large. Eventually the waves subsided and in time, the hauls were less and less.

It was during this time, she found herself again. The benefits had paid off and the crew were flying high knowing the amount had reached 100 tons with still a couple weeks to go. The work slowed down, and along with it came the sanctuary of the ocean. The brief moments of peace made her forget about the hectic pace of the first seven weeks. Staring out at the endless water made her appreciate this desperate opportunity. Although it was something she could never find herself willingly doing again.

I love this dish for its ease, it comes together very quickly for something so flavourful. If you get your prawns already peeled, this recipe actually takes 10-15 minutes from start to finish.  Personally, I like peeling the prawns myself – it is semi therapeutic and also you could make some killer prawn bisque with the shells. However, it is time consuming and sometimes painful (if you’re in a hurry and manage to stab yourself with the tail multiple times), so unless you intend on using the shells, just get them cleaned up at the market. Serve with some fried rice, or noodles and you are good to go.

15 medium sized prawns, deshelled completely or with the tail on

An inch of ginger, peeled and sliced 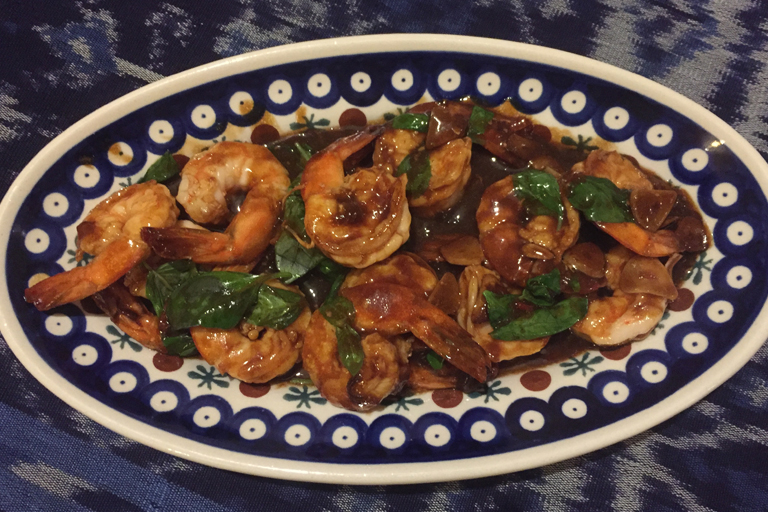 1. In a wok or frying pan, heat up 1 tablespoon of cooking oil on high heat.

2. Saute the garlic, ginger and chili until fragrant and then add the prawns

3. Once the prawns turn pink, add in the combined sauce, and cornstarch slurry.  Simmer lightly until sauce thickens. Add in the basil leaves and serve!