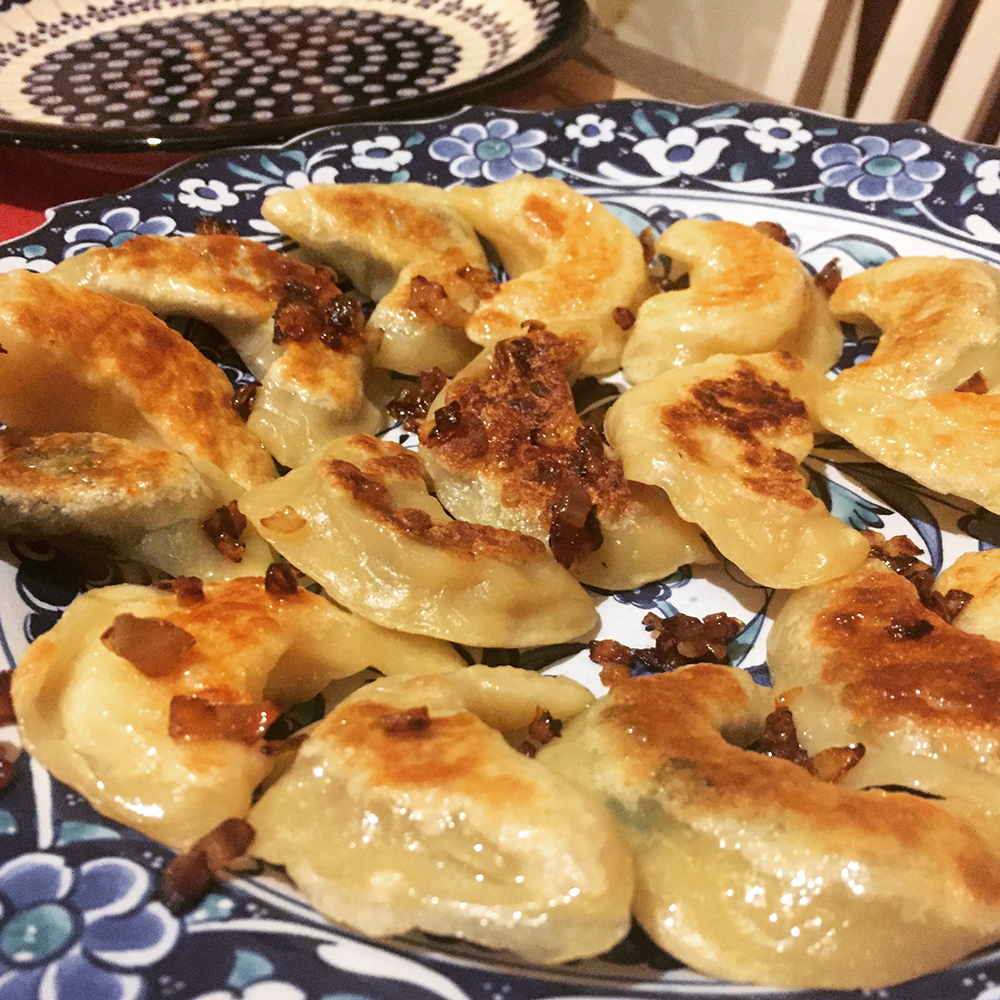 Opening my front door, I realised it’s pouring down with rain and I had no idea. Didn’t even hear a thing. Crap, I muttered to myself, as I braced myself and sprinted towards the car, jumping straight in. Shaking the rain off my hair and bag, I put on a big smile and greeted Sarah with all the enthusiasm I could muster.

“Wow, really working on that fake smile?” She gives me a one armed hug and a peck on the cheek, standard car greeting.

“It’s not completely fake, I am genuinely happy to see you. I just don’t want to be dragged out of my comfortable warm house for a pointless activity.”

Feigning an expression of pain, she grabbed my chin and shook my face, “It’s not pointless because it will be good for you.  Much better than just sitting and staring at a blank wall.”

She pulled out of the driveway and it took me a minute to steady my voice before I could respond, “I’m not just sitting and staring at a blank wall.” At least not all the time.

Sarah reached over and squeezed my hand, looking straight at the road, ever the safe driver.  “I’m sure you’re also staring at a blank TV as well. Can’t even lift those limp arms to turn the damn thing on!” She laughed from her gut, it was infectious and I couldn’t help but join her as well.

“Ok, seriously though, I’m fine. Stop worrying about me.”

“I’m not worried, I just haven’t seen you in a long time and I thought it would be fun to do a cooking class together again. Like back in the day.”

Like back in the day when all three of us would go for cooking classes together. That’s how it all started. One easy college credit that turned into a hobby that spun into a life. Or what was my life until recently.

I could sense Sarah’s eyes were on me, so I looked and her and said, “Enough about me, what’s going on with you? I’ve been a shitty ass friend recently and haven’t even asked about the latest colleague drama with Mark. Has he claimed your work as his own recently?”

“True, you’ve been pretty shitty recently, but I’ll forgive you this one time.” Smiling to herself, she then cascaded into a slew of stories to entertain me for the rest of the drive. For the next 15 minutes I completely forgot about my issues, and then she parked. “Alright, we’re here.”  Sarah turned the car off and immediately got out.

It took me a slow second to move, sudden dread coursed through my veins. Sarah opened my door, threw out her hand and pulled me out. As we walked through the doors and signed in, we were asked questions about our experience with cooking and if we’ve ever been to Le Belle Arti.  My head was swimming with the last six months of my life and I could barely sign my name. Sarah chatted away answering all their questions while I was too consumed in my own thoughts.

I had been betrayed, the business I had worked on for years was snatched away from me with no warning and no remorse. I was beginning to get angry with Sarah. Why would she bring me back to a place that we had gone with her. The third S. The three of us were S-S-Sisters – forever bound by our nickname. But now, I couldn’t even say her name, let alone think it without tears coming to my eyes. Before anyone could notice, I walked away, as if to look at the cooking supplies and ingredients.

Sarah came up to me, commenting on something. I snapped before I could restrain myself.

“Why the hell did you think it would be a good idea to come here? Or even think a cooking class would be the right activity to ‘lift’ my mood?”

She sighed, “I know we came here with Sasha, but remember, the first time we came 7 years ago? Without her. We learned how to make pierogi, and that’s when you became inspired to create your cookbook.”

Sasha. She said her name so easily. Hearing it said so casually made it penetrate my body and electrocute every single atom.

Barely talking above a whisper as an attempt to hold my emotions at bay, “You’re unbelievable.  You think a single cooking class is going to change my circumstances right now? She sold my business and left town, without giving me a single penny! That didn’t happen to you!”

“Shit, Sofie, it’s been six months. Fine, she didn’t steal my business, but she also broke my heart too with her betrayal. I just cannot see you sitting around all day when you are capable of achieving what you did and much more. You’re extremely talented and you have to get out of this mood. ” She started pleading,  “Please, you haven’t cooked in so long. Just try this one time and see how it makes you feel. I swear, if you hate it, I will not mention this ever again. But, promise me, if you feel just an ounce better, you’ll consider my idea and start over again. We’re making ravioli today, our favorite.”

She came in for the hug and I was no longer angry. She knew me best and recognised the tiny part of me deep down that needed this. I let go of the three S’s: Sofie, Sarah and Sasha.  Two S’s seemed infinitely better than three in this moment.

Pierogi is a classic Polish dish. Filled dumplings that are a complete comfort food. I was inspired by the recipe when my friend Caroline came to visit and it was her idea to make a fusion between Pakistan and Poland. A dear friend from school, my time when I lived in Poland, we decided to spend an afternoon catching up and making pierogi from scratch, but with a variation of the typical fillings.  Some of the classical fillings include potato, cheese, mushroom and cabbage. We took some of these elements and changed them up. Included in this recipe are my two favorite fusion fillings.

Making dumplings from scratch tend to be slightly tedious, but if you have a friend or two, it does become a fun activity. This recipe is in four steps; making the dough, making the fillings, assembling the pierogi and then cooking them.

This is the recipe I like to use and just takes a bit of time when it comes to kneading, but otherwise easy.

1. In a large bowl, put the flour and create a well. Then add the rest of the ingredients and mix with a fork.

2. Either with a fork or a wooden handle, combine the wet with the flour and when almost all combined, start kneading on a floured surface.

3. This may take around 10 minutes, and you’ll need to continue adding flour as it will be sticky.  The dough will be ready when smooth and elastic and the dough is not sticking to your fingers.

4. Rest the dough under a bowl for an hour (sprinkle some flour underneath the ball of dough)

1. Start by caramelising the onions in a large pan. With a generous amount of olive oil, and even butter if you want, put the onions on the stove and on medium heat cook them down for about 20-30 minutes until they are a deep brown colour. I like putting a splash of balsamic to bring out the flavour more.

2. Once those are ready, just add in the mushrooms, cumin seeds, curry powder and salt and cook down for a few minutes. Set aside.

1. In a bowl, put your cheddar cheese and once the potatoes are boiled and soft enough, add them to the cheese and mash them up.

2. Add in the masala and combine. Set aside.

1. Once the dough has rested, take half (leaving the other half under the bowl) and roll it out on a lightly floured surface until about ⅛ inch thick. You may need to also slightly flour the top of the dough and the rolling pin in case it seems to stick to the rolling pin. 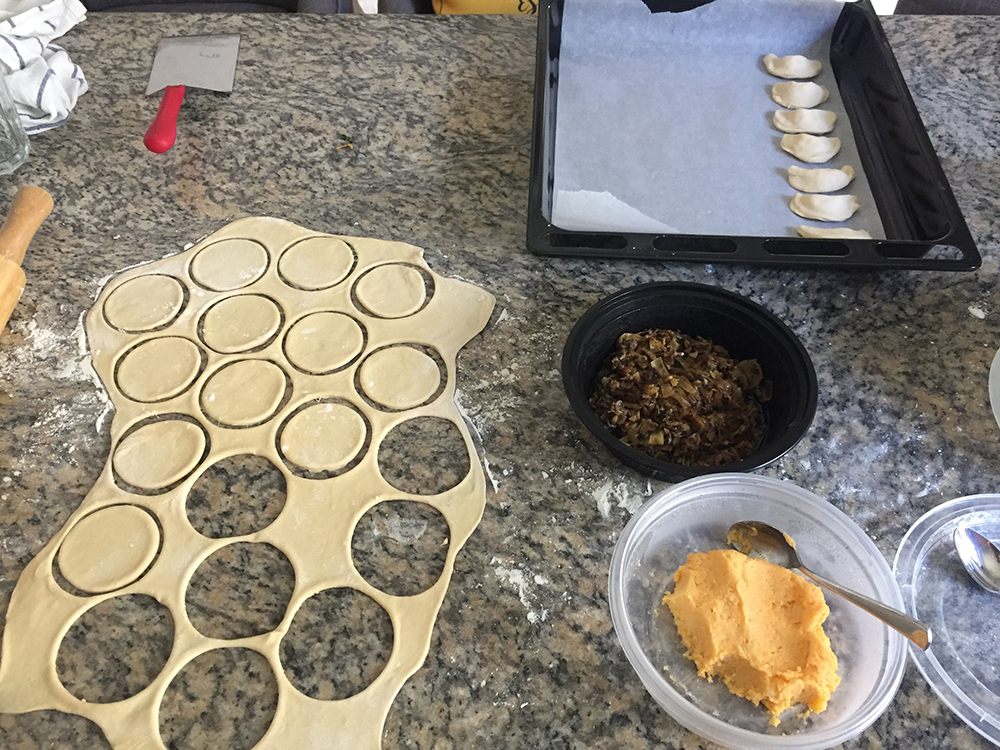 3. Taking one circle, flip it so the surface that was on your counter is facing up, and put about one teaspoon of a filling in. Now close the dough to make a half moon shaped dumpling.  Pinch the edges securely as you don’t want the filling to come out when boiling later.  I like to crease the edge with a fork to ensure it is closed shut. 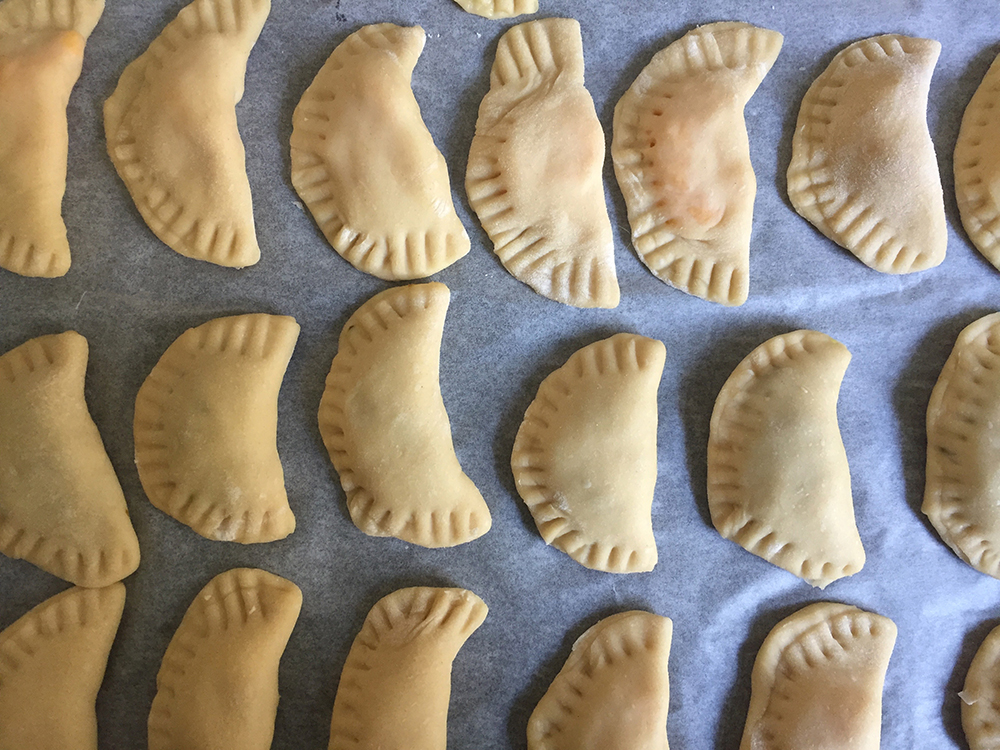 4. Transfer each pierogi on a baking parchment lined tray and finish with the second half of the dough.

1. Bring a big pot of heavily salted water to a boil, and boil 5-7 pierogi at a time. Stir the water to ensure they don’t stick to each other.  They’ll be done when they float to the top and only takes a couple of minutes. 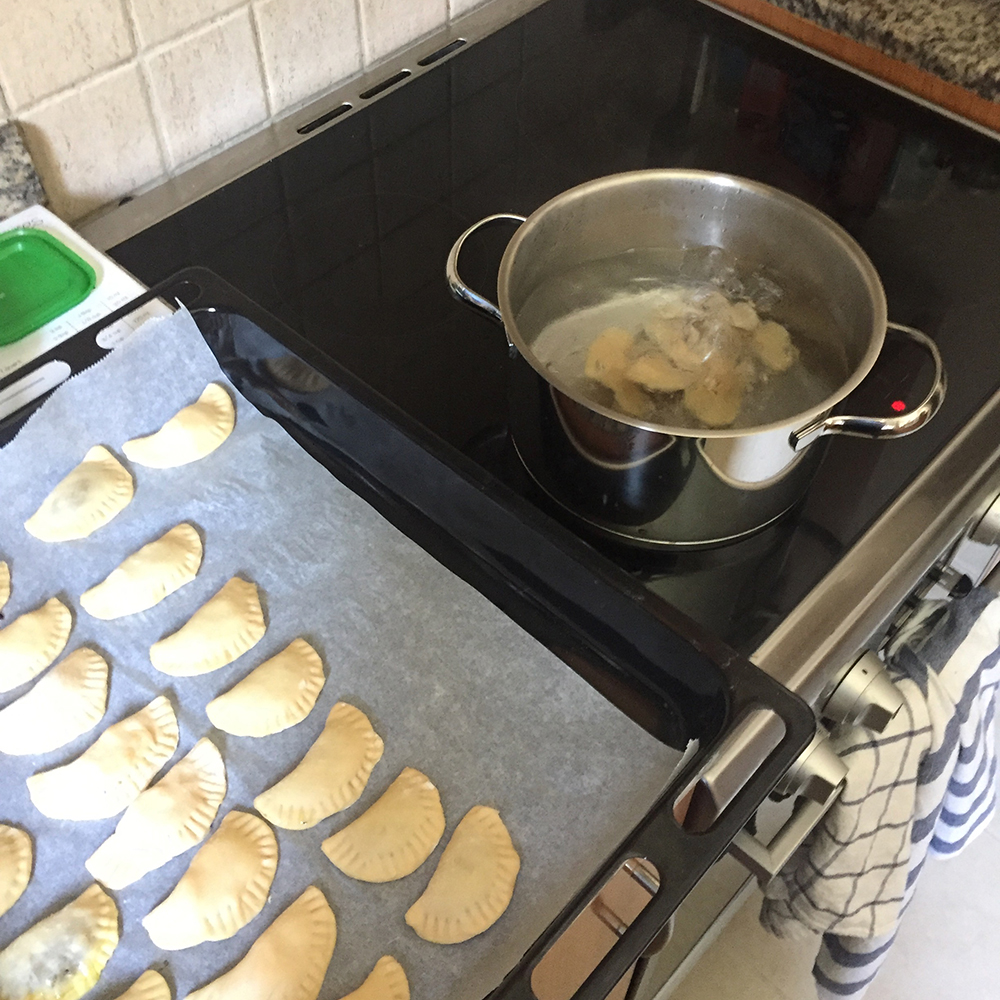 2. Return to the parchment lined tray and boil all.

3. Then take a large frying pan that you can cover with a lid.  Heat the pan with olive oil on medium heat and line pierogi once hot. Add a bit of water to the pan, cover with a lid and let them steam/fry for around 5 minutes. Check after a few to see the progress, the bottom should be getting golden brown. If the pan gets too hot, lower the heat to make sure they don’t burn. 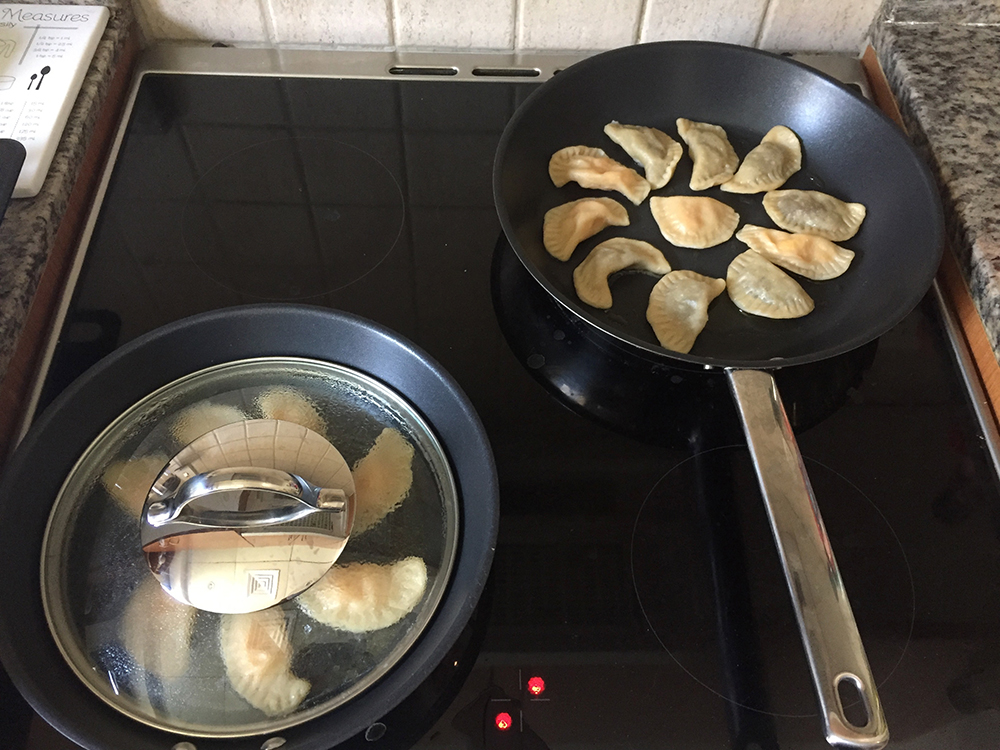 4. You can either fry all of your pierogi, or even freeze the ones you don’t want to eat immediately to save for later.

5. Serve with sour cream or yoghurt and eat! You can even fry some onions and throw them on top for some added flavour and texture. 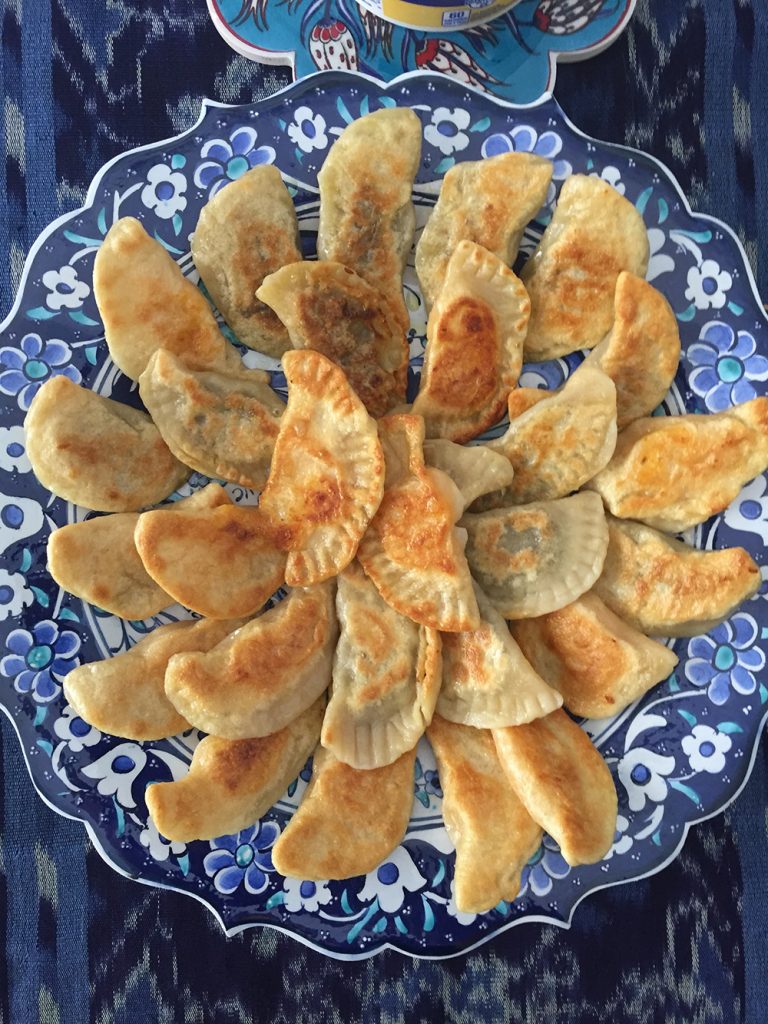