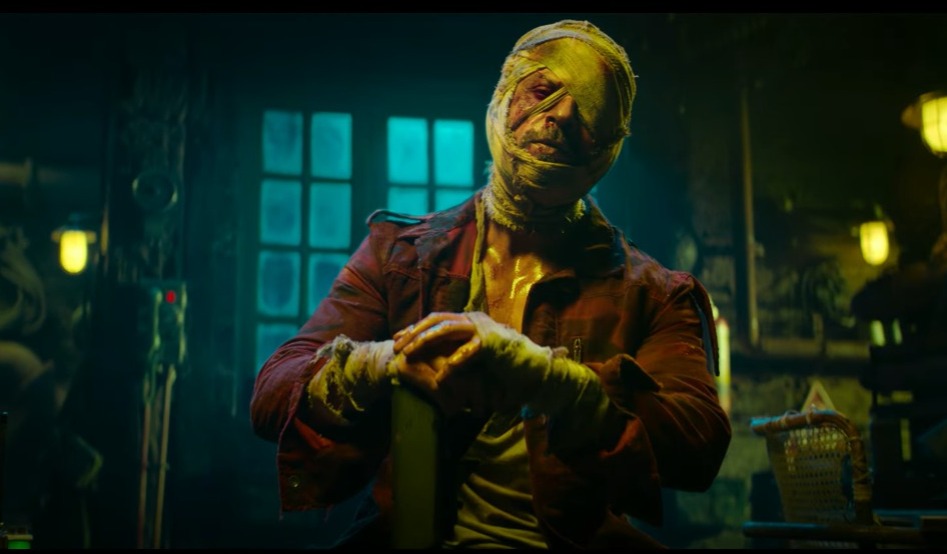 KARACHI: Shah Rukh Khan is back with yet another addition to the long list of his upcoming movies. The actor dropped a gory teaser for a new movie titled Jawan and has left fans in a frenzy. The movie is a joint project with filmmaker Atlee and is produced by Gauri Khan. Here is all that we know about the latest of Shah Rukh Khan and his upcoming movie Jawan.

While the cast and crew have been pretty tightlipped about the project as a whole, we do know that Sanya Malhotra plays a integral role in the movie and will share the screen with Nayanthara who will play the role of an investigating officer. On the other hand, Shah Rukh Khan is said to be playing a double role in Jawan. He will be playing both, the son of a gangster and a father who is a senior official in RAW.

The trailer sees Shah Rukh Khan bloodied and bandaged in a room full of guns and weapons. An ominous voice asks him if he is ready and he responds in the affirmative. His sinister get up alludes to whatever he is preparing for isn’t going to be something too great!

The photos from the title announcement video are insane!

I’m totally excited for this new upcoming @iamsrk movie. All the best to the entire team and the amazing director @Atlee_dir #Atlee #ShahRukhKhan #Jawan #SRK

Sharing the teaser for Jawan on Instagram, Shah Rukh Khan wrote, “An action-packed 2023!! Bringing #Jawan to you, an explosive entertainer in cinemas 2nd June 2023.”

And now fans have yet another Shah Rukh Khan project to look forward to in addition to Pathaan and Dunki!