Badhaai Do: Celebrating the unspoken 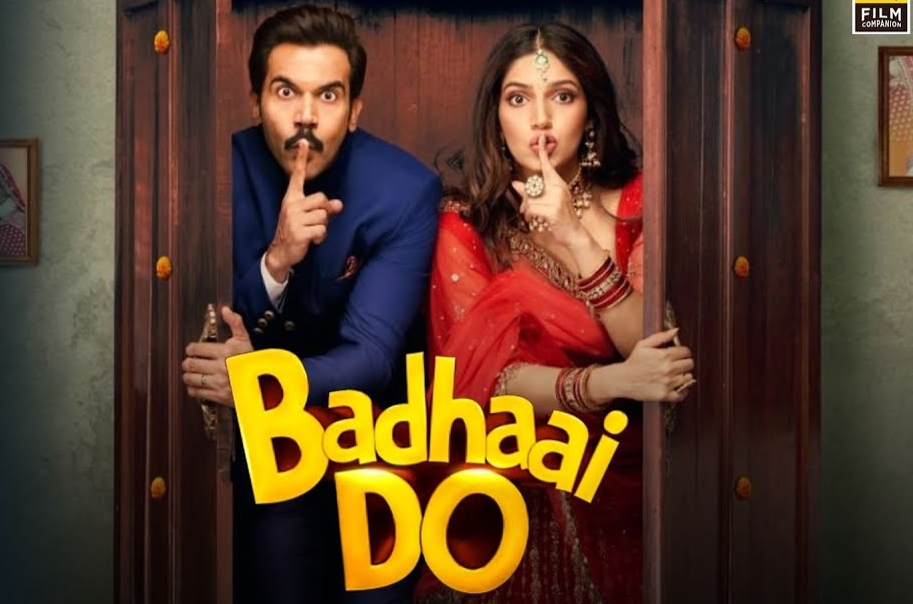 KARACHI: South Asian societies are the hub of the unspoken. We thrive under concepts of sharam, ghairat and we are very firm on concepts of right and wrong. We label people the same way we label the plastic containers at home and anyone who does not fit in must be discarded. We whisper under our breaths every time we come across an individual who is different from us. We play the religion card to dismiss entire communities. Homosexual individuals fall under the same category. Rajkumar Rao and Bhupima Pednekar’s recent movie, Badhaai Do, addresses the same. Continue reading if you have already watched the film, or come back to the story later to avoid any spoilers!

From the creators of 2018’s Badhaai Ho (which tackled taboos around pregnancy amongst older women), Badhaai Ho is the story of Suman and Shardul. Played by Bhumi Pednekar and Rajkumar Rao respectively, Suman and Shardul are two homosexual individuals living in India who end up getting married as a means to escape family pressures.

Both in their 30s, Suman and Shardul’s families are constantly on their backs for them to get married. However, neither of them have revealed the truth about their sexualities to their families. When Shardul coincidentally meets Suman and finds out she is in the same boat as him, he proposes that the two get married. They can continue living as ‘roommates’ doing their own thing while the world believes them to be husband and wife.

Given that Pednekar and Rao have been assigned lead roles, there is no question about the talent present in the film. Like always, the two bring their A-game on screen. But what is even more interesting to observe and explore are their characters. Shardul is a police officer, he has a moustache to go with his uniform, and six packs to complete the package. On surface level, Shardul is at the epitome of masculinity and all that it takes to be a ‘man’. Except that he is gay. Living in India, not only does he have to hide from his family and friends who he is, he also has the burden of the uniform on him. So he puts on a façade of the alpha male.

But what is beautiful to notice is the subtle ways in which Shardul uses his power as a police officer to facilitate the gay community. For instance, when his team raid a park to catch unmarried couples, he lets boys who are apparently gay go without a word. When a gay wedding is taking place, Shardul lets the baraat (that has people wearing gay pride colours and masks) celebrate with full enthusiasm. Of course, his subordinates object to the celebration but Shardul tells them “It’s not a wedding, it’s only a party. How can it be a wedding when the legal system does not recognise it?” But he watches from the sidelines and smiles as he sees people living their truth openly. Something that he, one day, hopes to achieve.

Shardul and Suman seem to have it all figured out with their roommate setting. Until they realize that they belong to Indian families where one person’s business is everyone’s business. Almost a year into the marriage, Suman and Shardul don’t have a kid yet. What could be the reason? Like Shardul’s brother-in-law tells him, it only takes one shot on the first night to make it happen. So then what’s stopping these two? From Shardul telling his brother-in-law that Suman is infertile to his family taking his wife to a gynaecologist and ultimately resorting to fake reports of Shardul having low sperm count, the two try everything to get out of the mess.

All of this is done in a manner that is humorous. After all, humour is our biggest coping mechanism in South Asian households. We joke about things to hide our pain, we brush them off so that they hurt less. Suman, too, plays along with the doctor’s visits and everything that follows. She never sheds a tear but it only makes audiences wonder, how many Sumans are out there who continue to put themselves through constant pain simply because of society?

An interesting layer to the story is added when it is revealed that Suman really does want a child. And she wants to adopt one. Even after coming out to their families, Suman and Shardul decide to stay bound to their ‘marriage’ because same-sex couples in India cannot adopt a child. Only traditional male-female couples can do so. Hence, Suman and Shardul continue being wife and husband on paper for legal purposes and adopt a child.

Badhaai Do is an attempt towards acknowledging and respecting individuals who society so easily shuns. It is a ray of hope that eventually, individuals like Suman and Shardul will truly be accepted by their families for who they are. While Suman is more open about her sexual orientation, Shardul continues to keep up with his image of a macho police officer. His family may know but his colleagues do not. Until a beautiful moment happens in the film during the song ‘Hum Rung Hain’.

Shardul leads the security protocol for a gay pride march. Him and his fellow police officers stand in a corner as they pave the way for the LGBT community to dance and celebrate under their pride flag. Suman and Shardul’s other friends join the celebration while Shardul watches from a distance. He gives his subordinates a look when he catches them mocking the march. Suman and company beg Shardul to join them as they dance their hearts out. To step out and join the movement is a big step for Shardul. So he starts with a smaller one. He borrows a gay pride mask and puts it on. Nods at his colleagues and smiles at his friends as he takes the first step towards being himself in public.