In their newly released track, Auj explains how hate is merely an extension of love 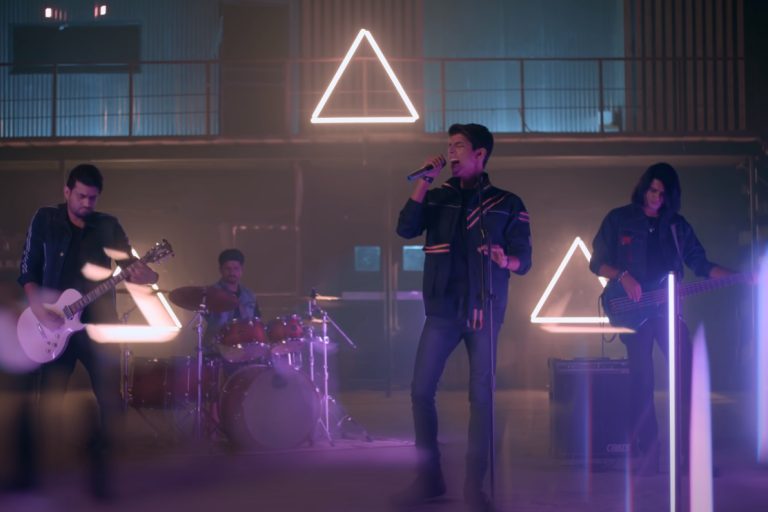 KARACHI: It has been well known for decades that the absence of love is not hate, it is indifference. Hate ensures some emotional fixation with a certain person remains, while indifference is the void where no emotional connection, good or bad, ceases to exist. Conjuring up this very spirit is Auj the band, in their newly released song ‘Nawazish’.

Suffocating, yet clasped onto the other half, sucking the life out and draining, yet passionate is the kind of love projected through the visuals as well as the lyrics. Throughout the lyrics, the lovers use language towards one another that is complaining, taunting, and often calls the other person out. The lighting uses purple hues with a dramatic split lighting to intensify the drama that unfolds. The color scheme adds to the obsession the lovers hold towards one another. The lover, played by Anoushay Abbasi, creeps up on them. This is something that suggests how subtle love is when it starts, you do not see the toxicity it comes with until it blatantly suffocates you.

Clad in all black, a color that absorbs all the light and reflects the least, Anoushay Abbasi’s long flowy dress shows her character almost “draped in darkness”.

The winners of Pepsi Battle of The Bands themselves feature in the music video and play different characters that have fallen prey to such toxic relationships. Auj can also be seen performing throughout ‘Nawazish’. The performance sequences complement the video with the lighting plan they follow. Intense closeups of the musicians add to the intensity of the entire package.

Abdur Rehman Sajid’s vocals manifest the pain the lyrics and the music composition is trying to curate. His deep eastern voice carries forward the excruciating agony that is reflected in the ending sequences where each musician’s character dies gasping for air. Every character allows Abbasi’s character to take away their life and go down without any struggle. Love becomes the death of them and they do not seem to mind, even if their words may reflect something else entirely.

‘Nawazish’ was officially released earlier this week at an event with celebrities, media personnel and the band in attendance. They performed to a live audience who thoroughly enjoyed their energy and fell in love with their newest song. Anoushay Abbasi, who features in the song, was also present on the occasion. Speaking to audiences about their experience with the song, the band shared that they shot the entire music video within 10 hours.

“It’s been a while we released a song but now we plan to release more of them in the coming months,” Abdur Rehman told Cutacut on the sidelines of the event.