In a session during the recently concluded 13th Aalmi Urdu Conference, the actor shared that they need the vision and experience of veteran playwrights for stronger scripts 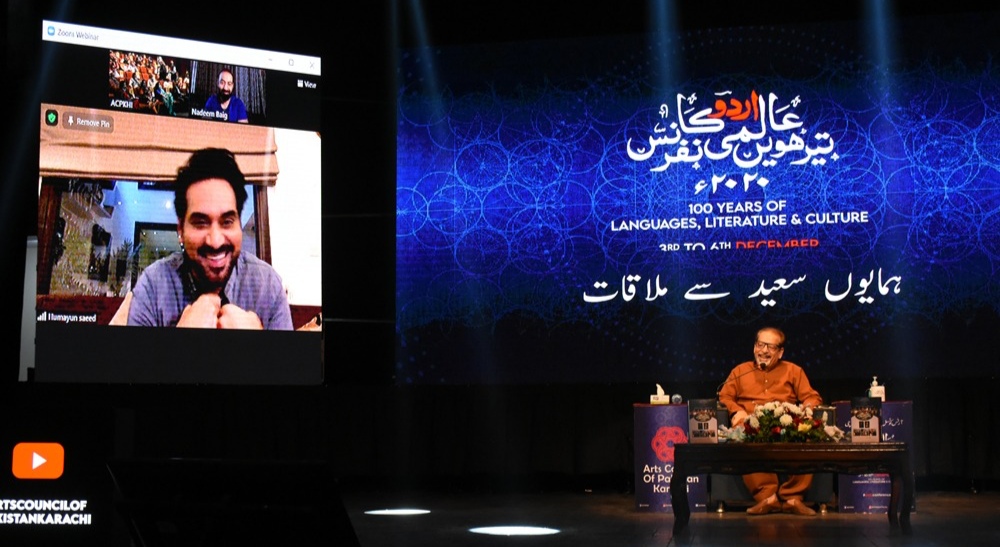 KARACHI: Arts Council of Pakistan and its president, Ahmed Shah, are making constant efforts to promote arts in Pakistan. Even amidst the pandemic, as soon as the situation eased, the platform held events to keep the tradition alive. First came the Awami Theatre Festival 2020 and then there was Karachi Theatre Festival 2020 that took place at the Karachi Arts Council. Adding to the list is the Aalmi Urdu Conference 2020 that concluded over the weekend. The 13th edition of the event featured talks, poetry and prose recitations and multiple sessions over the course of four days.

The evening of the final day, Sunday December 6, featured a talk with Hunayun Saeed while filmmaker-producer Nadeem Baig served as the host for the evening. The two leading artists spoke about the importance of a strong script and what can be done to achieve that.

“We have been working on film scripts but waiting for a good script for TV. If Nadeem and I aren’t doing TV lately, it is because we don’t have a good script,” shared Humayun. “I recently met some writers including Khalil ur Rehman Qamar, Faiza Iftikhar and Umera Ahmed. Most dramas that we see today lack 3-dimensional characters. Earlier on, characters used to have a purpose but now scripts are mostly about plot and events.”

Speaking of older, experienced playwrights including Haseena Moin and Noor ul Huda Shah, who were also in attendance, Humayun Saeed added that the character arcs used to be strong. “There was a beginning and an end. We miss our old writers,” he admitted.

When asked if we should have their contribution in today’s mainstream projects, Humayun Saeed responded, “Definitely. What our scripts lack today is their experience. One can discuss the structure with them – dialogues and depth in characterization that is required can be achieved with them.”

“What stop us or you from doing that?” asked Nadeem Baig.

“These writers do not churn out plays like writers of today. I think we have also become a part of the rat race and keep giving work to the ones who are writing more. If they are not working with us, it is our fault. We should include them in some capacity and utilize their experience for our projects,” replied Humayun.

Moving on, he also spoke of films and how they have been affected due to the coronavirus pandemic. He rightly pointed out that the shift towards digital due to Covid-19 has harmed cinema. However, he feels that once it is back to normal, some films can only be enjoyed on the big screen. “Unfortunately, we do not have smooth collaboration with international digital platforms where we sell our films and recover our money. I am sure that will happen in future and we will be able to release our films in cinemas and online simultaneously on bigger digital platforms hopefully,” he added.

He also informed that they have finished shooting 70 per cent of London Nahi Jaunga and waiting for the situation to get better to shoot the remaining spell in London. Meanwhile, Humayun Saeed and Nadeem Baig are working on three upcoming films. Naram Garam, Love Guru and Aaj Rang Hai. The first two have been penned by Wasay Chaudhry while the third script is written by Zanjabeel Asim Shah.

Adding his two cents on the subject at the Aalmi Urdu Conference 2020, Nadeem Baig maintained that cinema for sure needs government intervention and support. “They have had multiple meeting and discussion now. They know almost all the aspects and issues. It is on them to figure it out. It is time for some practical efforts before cinemas start shutting down again and revival becomes very difficult,” he concluded.