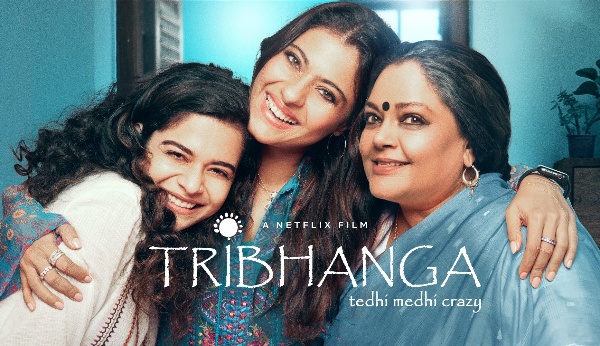 KARACHI: It is always exciting to wait for a new Netflix original, especially an original show or film by Netflix India. What was even more exciting about the latest original film by Netflix India was the return of Kajol to the big screen. One of Bollywood’s most admired actors, Kajol has a personality which instantly attracts audiences, on and off screen. However, the film titled Tribhanga: Tedhi Meri Crazy has little to offer other than Kajol’s wit and talent.

The film tells the story of Anu (Kajol), a single mother who struggles to have a healthy relationship with her own mother. Within minutes of the movie, Anu is introduced as a famous dancer. Anu’s opening shot is in an Odissi outfit, while the film is titled Tribhanga after a standing position commonly seen in Odissi dance form. Yet, not once does the audience see Anu dancing. As a film which is titled after a particular posture and whose trailer introduces Kajol dressed in a traditional Odissi outfit, one was expecting at least one instance where Anu might have been performing.

It soon becomes evident that Anu does not share a healthy relationship with her mother (Tanvi Azmi as Nayantara) and blames her for depriving Anu and her brother of a happy childhood. Anu also has anger issues and is especially annoyed by Milan (played by Kunaal Roy) who is working on Nayantara’s biography. Kajol fits the role of Anu quite well and her acting seems natural but the storyline itself lacks depth. In a series of flashbacks, it is revealed that Anu was sexually harassed as a child by her mother’s boyfriend, which leads her into hating her mother as well. However, it is only through Milan’s character that Anu finds out that her mother did not know about her daughter’s trauma. The audience witnesses no closure between the mother and daughter for Nayantara stays in coma for most of the movie.

Anu’s brother Robindro (played by Vaibhav Tatwawaadi) is quite vague as well. He is quite the opposite of Anu, for he is calm, optimistic and clearly religious. But what kind of relationship he shared with his mother? Is he also as angry at Nayantara as Anu is? How did he cope after an unhappy childhood? Even more vague and frankly, unnecessary, the character is that of Anu’s friend, Raghav (Manav Gohil). Raghav is apparently in love with Anu but remains a mystery since Manav does not appear in the movie for more than a few minutes. Why was his character included in the movie anyway? Was it just to highlight Anu’s fear of commitment or the fact that she constantly switched boyfriends, a fact highlighted by her daughter.

Anu belongs to a dysfunctional family but her daughter Masha (played by Mithila Palkar) does not take after her when it comes to relationships. Masha marries the man of her choice and adjusts into his family even though living in an extended, conservative family is new for her. Masha’s in-laws are nice until they expect Masha to give birth to a boy for them. Perhaps they would have forced Masha into aborting the child had it been a girl, but Masha chooses to overlook this simply because her in-laws are not as emotionally damaged as her mother is. Masha settles for less because her expectations of a healthy family are quite low.

Only briefly Masha also confesses to her mother about being bullied at school. Her confession immediately reminds Anu of her own past, of the time she was abused as a child but could not tell her mother. In an absurd manner, Tribhanga somehow equates bullying to sexual abuse. While both acts are traumatising for the victims, they cannot be compared to one another. Perhaps, the film could have handled the topics in a better manner had they left room for the subjects to be explored in detail.

Tribhanga wraps up in 90 minutes, while most Bollywood movies at least last for two hours. Did the movie feel rushed because of its duration or was this all that the team behind Tribhanga had to offer? Would most people even watch the movie had Kajol not been a part of it? Probably not.