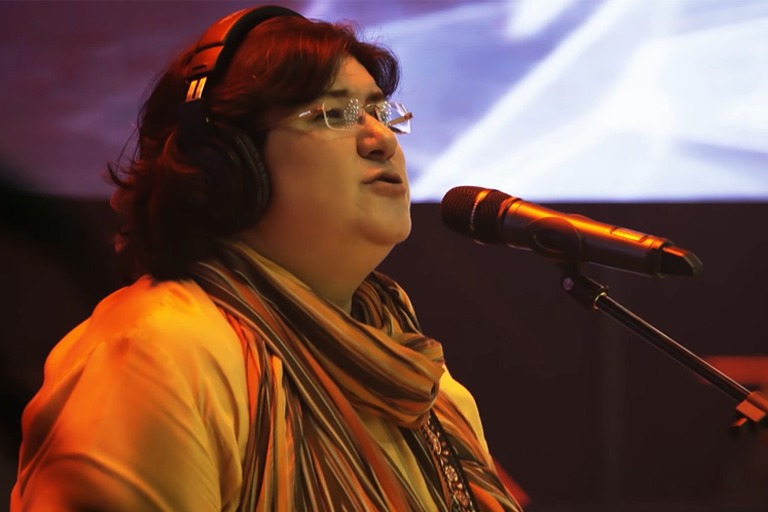 BERLIN: Recently, Haniya Aslam of Zeb and Haniya fame released a solo song ‘Ayi Re’, which can be considered a perfect new addition to your current quarantine and COVID-19 playlist. Any existential crisis you may feel as the world goes through major changes, can be temporarily assuaged as you listen to this track. According to Haniya’s Instagram post, ‘Ayi Re’ is her “minstrel song” and musicians Kami Paul (drummer/percussionist) and Sameer Ahmed (bassist) are the “groovy backbone of the track”. The song is accompanied with a beautifully calming animated video created by Magdalena Wysoczyńska.

And here is Ayi Re! This is my minstrel song. Its a result of two decades of following the call of music and letting it take me wherever. Countless journeys, drives, flights, friendships later I've returned home, but the adventure is far from over. This is simply the beginning of a whole new journey. And I can't wait to see where we go from here 🙂 Drummer extraordinaire @kamipaulofficial and the mosr musical bassist I know @thirdworldcelebrity are the groovy backbone of this track. The brilliant @justingraybass mixed and mastered it to perfection and @obrazkiruchome made this gorgeous mixed-media animation. I really hope you like it! Lots of love, Haniya PS. Link to full video in bio #haniyaaslam #ayire #singersongwriter #acousticmusic #pakistanimusic #pakistanimusicians #torontomusic #torontomusician #torontoworldmusic #animatedmusicvideo #mixedmediaanimation

Both Kami and Sameer have been two of Haniya’s favourite musicians to work with since the Zeb & Haniya days. When time came to record the song, Haniya knew she wanted to keep the song simple and just have guitar, bass and percussion. “The process was very smooth and I’m very happy with how it all came together,” she says.

For Haniya, ‘Ayi Re’ was a way to process all the experiences she went through over the last decade. “Realizing I had achieved my dream of becoming a musician, being seduced and disillusioned by the business of music, meeting heroes and realizing they were human too,” shares Haniya. “And the biggest cliche, that the journey is always far more important than the destination. Ayi Re is a kind of metaphor for these realizations.” she elaborates.

Haniya claims that she is not a very visual person as her imagination is mostly aural, but she knew that for ‘Ayi Re’ she wanted a simple 2D animation. “The biggest issue with animations is cost, both in terms of money and time,” says Haniya. “Winter last year, this was all I was talking about, and a Polish friend suggested Magdalena Wysoczyńska to me. We had a couple of initial conversations and she drew up a gorgeous storyboard which convinced me,” she added. She wanted the song to be a multi-sensory experience and didn’t want to go down the sponsorship route so she decided to self-finance the animation.

“The paradox is that music is now more of a visual-medium, with more people watching music on YouTube than just listening to it,” says Haniya. “A lot of artists are using lyric-videos as an affordable vessel for their songs.”

Haniya’s last show with Zeb & Haniya happened in 2013, after which she moved to Canada to study audio engineering. She set up her own audio post production company called Citrus Audio and worked in Canada for three years before returning to Pakistan in 2018. Since then, Haniya has been producing music for young local artists, did post-production on some web series and has also worked as an editor on Coke Studio.

“It’s been a roller coaster ride. We achieved relative success much faster than we had anticipated, and the rest of my time in Zeb and Haniya is a bit of a blur.” shares Haniya. “It was tremendously exciting to travel, meet new people, collaborate with tremendously talented musicians from all over. But at a certain point, I had to choose between being a full-time touring musician and being a songwriter. Touring life left very little space in my head for creative ideas to germinate.” she added.

Living in Toronto gave Haniya the kind of musical environment that helped her grow in her craft, thanks to the thriving music scene which allowed her to see live shows of all types of music, ranging from jazz blues and more. Haniya also received a government grant to learn Irani and Turkish music traditions which included learning new instruments like the Irani sitar and Turkish baglama. For Haniya, moving back to Pakistan from Canada happened at the right time. She built a studio, Citrus Audio, and since then has been working with some of her favourite musicians and has been exploring recording acoustic instruments.

“I was still writing songs on the side but I had no plans for them,” says Haniya. “And when I finally made my own studio, there seemed no reason to not record them. I felt it might be time to put the songs I had been writing over the past few years out into the world. More for catharsis than any other reason. Ayi Re was the strongest song out of the current lot, and I just felt an overwhelming urge to share it.” she shares.

Read: Natasha Baig reminds us that it’s 2020 but still difficult for women to make it big in the music industry

Although Haniya is busy with other projects, she plans to record her remaining songs in the breaks between those projects. When it comes to the musical direction she wants to follow, Haniya is a musical explorer. “New ideas excite me, and I like to keep learning and creating. For now, I’m in a folk acoustic space, and I want to perfect the raw and organic sound that’s in my head,” she explains.

If you’ve been touched by Haniya’s new release and the fact that you finally got to listen to something by Haniya after years, there’s more coming. Haniya has future music collaborations in the pipeline for fans to look forward to. She has already recorded some demos with artists in Islamabad and KPK and she has been approached by bands seeking a more organic sound. So it’s heartening to see that despite the daily struggles of being a musician in Pakistan, we still have new music to look forward to from her end.