Weeping Under Chandeliers: a study of the recent offerings of Maria B

The privileged elite do not expect to be held to account, and if they are, then, like spoiled children, they are indignant, shocked, dismayed 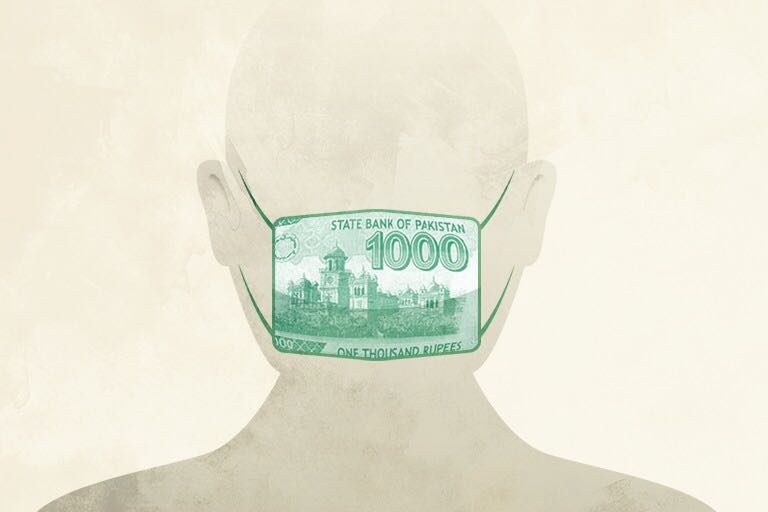 On Tuesday morning, the Lahore-based fashion designer Maria B uploaded a video on to Facebook. In it, she tearfully recounts that a number of policemen entered her house the night before and imprisoned her husband.

“Twelve thirty at night,” she says, “we tried calling so … nobody was up.” Here, before she cuts her sentence short, she is referring, undoubtedly, to calling her friends in high places, who were all asleep at the time. These calls that she attempted, along with the direct appeal to the prime minister, and her husband’s release from prison not long after, are indicative of what we all know anyway: the elites are absolutely protected from the consequences of their actions, and if they do end up being held accountable, it is only momentary, and the reaction is outrage, disbelief, and a disproportionate sense of victimhood – how could this happen to someone like me is the message of this video: I am no mafia don. I am, in fact, the victim.

“They kept saying to us, ‘you, you are culprits,’”B. says, “Why? We’re the ones who are suffering. We’re the ones whose tests are coming, anytime, positive. My entire family.” This is the only context she provides, implying that somehow, her family has come under threat of contracting the virus, and that instead of receiving empathy, they are being penalised for this. The real story soon emerges: their cook tested positive for the virus while in their household, and that evening, he was either sent or given permission to leave her house, and return to his home village in Vehari.

Later that day, Maria B’s husband, Tahir Saeed, is released from prison on bail, and together, they put out another video explaining the situation. They run us through their thought process when their cook Umar Farooq’s results came out positive. First, B. claims, she decided to have him quarantined with another family in the servants’ quarters. Even according to her own testimony, it is not her, but the cook who raises concerns about infecting this other family.

Maria B, evidently, is zealous about the protection of herself and her family, and fully informed of the importance of distancing, but is unconcerned about what happens in her servants’ quarters. The backdrop to her videos, by the way, is a home of nearly unfathomable opulence: there is clearly no dearth of space in this household. Yet, the only space available for this ill man was with another family in the servants’ quarters. It seems to be unimaginable, even in pandemic conditions, for Maria B to offer this man a room in her house, outside these quarters.

It seems to be unimaginable, even in pandemic conditions, for Maria B to offer this man a room in her house

This is because things like inferior living conditions are essential to maintaining the dehumanisation of domestic workers in our country. If we gave them rooms as nice as our own, we would have to recognise their humanity, and then we would have to face the shame of our inhumane treatment towards them, when we let it sink in that they are people, no less human than ourselves. The separate cutlery and living areas, our not sharing our sofas or dining tables with them, our addressing them with ‘tum’ and by first-name basis even when they are older than us: none of this behavior is incidental. It is necessary for their continued dehumanisation, to relegate them to another species, to maintain boundaries and to allow for their oppression. After all, if we acknowledged that they were just as human as we are, who knows what would happen? In Lorraine Hansberry’s play, A Raisin in the Sun, a white community is so desperate for a black family to stay away from their neighbourhood that they offer to pay them not to move in. When the family learns of this, one of the women comments, “What they think we going to do – eat ‘em?”

Many have reacted to the Maria B. videos with disgust and mockery; after all, their carelessness, their sense of entitlement, and their egotism is painfully obvious. And yet, beneath, of course, there is their humanity too. Their sense of panic in the face of an unknown situation has come up against a culture of elitist entitlement, and this is the result. And in the critiques (including this one), a kind of moralistic superiority can creep in, in the same way that we mock people like Trump to reveal stupidity, and thereby establish ourselves as less so. But no, we are all complicit in this system. It is a delicate balance, a negotiation of blame and accountability, but maybe the story can remind us of how our well-being depends on the sacrifice of others, and maybe we can learn to live with generosity, gratitude, and grace, allowing for flows of give-and-take to be less transactional, less unequal, over time.

This virus will reveal the best of us and the worst of us. It is a time when extreme emotions will rise to the surface, and what that can also open up, slowly, is the possibility for transformation and change. May we learn to hold each other in more responsible ways at this time. Maria B. turns to nationalism in her defense as well, saying how she is a responsible citizen of Pakistan. Perhaps, however, it is this kind of nationalism – putting one’s country, and for that matter, one’s family, ahead of another’s – that results in the divisive and simplistic thinking she shows.

This virus will reveal the best of us and the worst of us.

At one point, her husband Saeed says that they are not complaining about police harassment, as most people have been subject to police harassment. B. adds, bizarrely, “Hum privileged nahin hain (We aren’t privileged)”. Maybe here, she’s trying to say, in response to public criticism, that they don’t feel above this kind of treatment. Who knows? But “hum privileged nahin hain”? This kind of defensiveness and denial has no place in such an obviously unequal situation. The conversation, after all, can only begin with an acknowledgment of our privilege and the ways in which we misuse it, and abuse it.

Saeed continues that the problem is not the harassment, but that this kind of police reaction to the virus will cause panic and deter people from having tests done. They will think, Saeed says, “Kay agar hum nay tests karwa liyay toh government institutions hamaray peechay par jaeen ge” (If we get tests done, the government will get after us). B. chimes in: “Agar [corona] ho bhi gya, to kya hua? Arrest karnay kyun aarahe ho?” (So what if we even test positive for Corona, why are you arresting us?”). Here, once again, the couple reverts to the premise that they were arrested for having the virus, or being suspected of having it. They seem to cling to this fictitious narrative, which may have induced sympathy if it were true. But of course, it’s not true, and when they get to the actual story, their justification falls apart straight away. “Meh nay apne own pe test karwaya (I got him tested by my own will),” Maria says of her cook’s examination, as if she should be congratulated for paying for his test. They also inform us, twice, that they paid Farooq extra for his transport, and her husband reiterates later, “Hum nay apnay kharchay par test karwaya (We paid for the test” (Soon after, comically, he seems to stifle a cough – the absurdity of this video knows no bounds). “We were not irresponsible,” they declare.

“As a woman, as a working mother, and as one of the … business women of Pakistan”. Again, B. skips a word. ‘Foremost’, maybe, or ‘ most important’? She says she may have been targeted, or the subject sensationalised because she is Maria B. And once again, she talks about how she should not be seen as a mujrim (criminal) just because she may have coronavirus. Again and again, she seems to mix up the story in her own head.

The couple’s outrage and defensiveness to their being held to account is, on some level, unsurprising. The privileged elite do not expect to be held to account, and if they are, then, like spoiled children, they are indignant, shocked, dismayed. In The Pedagogy of the Oppressed, Paolo Friere outlines this kind of situation. He says that the elites will inevitably react with dismay if the oppressed are humanised:

“Conditioned by the experience of oppressing others, any situation other than their former seems to them like oppression … any restriction on this way of life, in the names of the rights of the community, appears to the former oppressor as a profound violation of their individual rights – although they had no respect for the millions who suffered and died of hunger, pain, sorrow and despair. For the oppressors, ‘human beings’ refers only to themselves … For the oppressors, there exists only one right: their right to live in peace.”

The virus, they say, entered our system by transgressing a species barrier: it was meant to pass only from bat to bat, but something was transgressed, and now, us humans have it. And so, just like that, this minuscule being, this little bit of DNA, has brought the world to its knees.

We, in response, are trying to solidify our remaining barriers: closing the doors to our houses, our countries, and in the case of some of us, especially those who prioritise the protection of our own resources, our hearts. In this video, Maria B opens her doors for a moment, albeit inadvertently, and she reveals herself. We observe the distortions in her thinking, and the opulence in which she lives; and the people who serve her are there too, hovering in the margins. Twice, she mentions her two maids, who “sleep downstairs”. And once, we hear the voice, it seems, of one of these maids. She looks to the side in this moment, aware of the interruption, and we wonder, then, maybe, about these two women. The super elite are also super private: we don’t often get to see them on such public platforms in such vulnerable moments, in the privacy of their homes, and so, it feels significant, and the videos have been shared profusely.

I for one am glad for the intrusion, for the opportunity to infiltrate. Maybe this is also the job of a writer: to find the spots that give way, areas in which to enter, to try and find a gap in the barrier, and to penetrate into the heart of the matter. Then, just to hang around for a while, taking it in, allowing for shifts, uncomfortable as they may be. Finger pointing and moral uprighteousness are not the answer, but naming things, seeing things as they are, can be useful. Freire also says that “to exist, humanly, is to name the world, to change it. Once named, the world in its turn reappears to the namers as a problem and requires of them a new naming.” Ameen.