KARACHI: Pakistani band Strings have just released their new song titled Raat Shabnami, a track from their album Thirty that is meant to celebrate the thirty years since the band has been making music.

One of the most impressive things about the song is the music video that is very craftfully designed using 3D animation and CGI. The video starts off with a brief overview of the band being formed in 1988 and gives reference to their new album, Thirty. The anticipation of the band’s future is reiterated in the music video as the text ‘Here’s to a hundred’ slowly transitions into an image of Faisal Kapadia and Bilal Maqsood performing the song in a futuristic setting.

The techno-inspired tunes make the song immediately likeable and fit in to the current genre of popular music. It is important to note that the band has not lost their identity by making these subtle production changes as the song manages to stay true to String’ signature musical style.

However, what we’re glad to see is that Strings still hold the same place in the hearts of their Indian fans as they did back in the day, when they produced songs such as Zinda Hoon for the film Zinda, starring Sanjay Dutt and John Abraham.

One quick look at the comment section shows that the majority of comments are flowing from across the border. 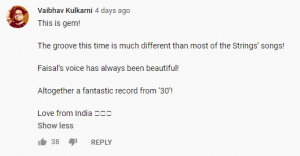