The world’s largest rainforest is engulfed in flames

Brazil’s Amazon rainforest is burning at a record rate, threatening the fight against climate change 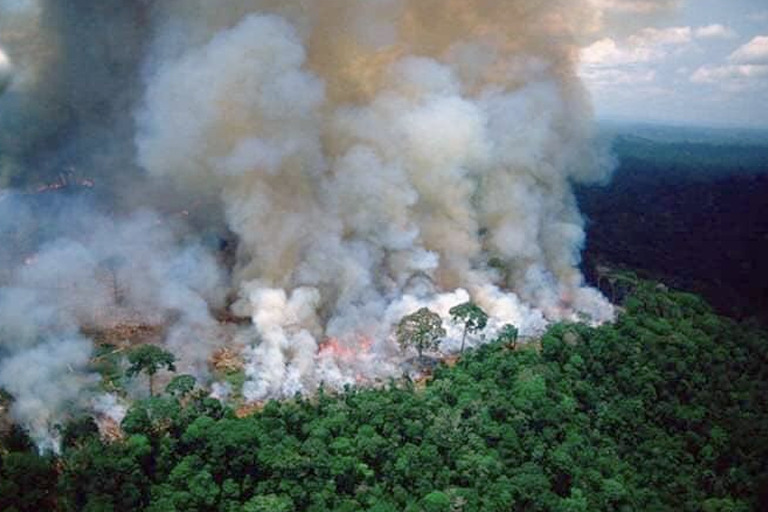 Brazil’s Amazon Rainforest, which has seen a record number of fires this year, is currently engulfed in flames. The reason why these wildfires have broken out is because in the dry season in Brazil is due to the heat emissions as a result of increased levels of deforestation in the area, according to news reports.

The Amazon Rainforest is the largest rainforest in the world and it is a essential carbon store responsible for slowing down the pace of global warming.  In addition the forest is resident to one million indigenous people and around three million different species of plants and animals.

In a report by BBC News, it stated that the The National Institute for Space Research (Inpe)  claims that it has observed more than 9,500 forest fires since Thursday predominantly in the Amazon region. Residents of São Paulo witnessed a sky resembling an apocalypse that was dark grey and densely covered on Tuesday.

🌎Just a little alert to the world: the sky randomly turned dark today in São Paulo, and meteorologists believe it’s smoke from the fires burning *thousands* of kilometers away, in Rondônia or Paraguay. Imagine how much has to be burning to create that much smoke(!). SOS🌎 pic.twitter.com/P1DrCzQO6x

The President of BrazilJair Bolsonaro, in a press interview angered millions by saying that NGO’s may be setting fires in the Amazon with the agenda of embarrassing the Brazilian government since it cut their funding. Twitter users are arguing that there is no proof to back his claims and are calling him out for being irresponsible about the environmental crisis.

A potential environmental catastrophe that would affect the entire planet, and Brazil's right-wing president, Bolsanaro–who thinks the Amazon rainforest should be opened up to business interests–decides to blame NGOs. #AmazonFire #ClimateEmergency https://t.co/DjsQgjxbje

Fox News just ran a claim, without pushback, from Brazil's president Jair Bolsonaro that NGOs intentionally started the fire in the Amazon in retaliation for having their budgets cut.

There's no proof of this whatsoever. But Fox ran with it anyway.

"These a**holes came & burned down our forest." (Pataxó woman)

Since @jairbolsonaro became President of Brazil, the number of fires deliberately started to illegally deforest the #Amazon for cattle ranching & mining have soared. #Ecocide
(via @sevageong) pic.twitter.com/c0TWUI8N0P

Brazilian President Jair Bolsonaro has accused non-governmental organisations of setting wildfires in the Amazon rainforest to damage his government's image after he cut their funding. | https://t.co/RrFhxbstWS pic.twitter.com/D2K8i8pzwJ