Cannes 2018 is all about women empowerment 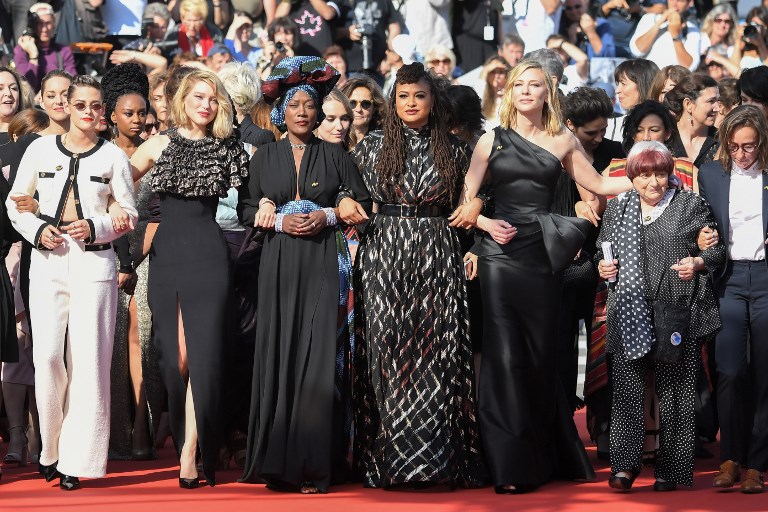 KARACHI: To be honest, we never really noticed the gender parity at one of the biggest film festivals in the world. Or were we so used to the scale being uneven that we never considered raising our voice against it? Regardless, things are clearly changing at the Cannes Film Festival this year and we’re listing all the happenings that prove that 2018 is the year for women in film.

This is the first time since 2014 that the Cannes jury has had a female majority. Headed by Cate Blanchett, the jury also features Kristen Stewart, Ava DuVernay, Khadja Nin and Lea Seydoux.

Women are ruling the jury for the 71st annual Cannes Film Festival, which is now underway in southern France. The majority-female jury – which includes jury president Cate Blanchett, Ava DuVernay, Kristen Stewart, Khadja Nin, and Léa Seydoux – is being celebrated for its inclusion of women and diverse voices. As the festival got underway, the French minister for gender equality called on the movie industry to use Cannes to "liberate and listen to women's voices" in the #MeToo era. Read more at the link in our bio.⠀ ⠀ (📷: Joel C Ryan/Invision/AP) #womenandgirls #genderequality #equality #cannes #cannesfilmfestival #cannesjury #cateblanchett #avaduvernay

82 women, representing the number of female film-makers whose films have appeared in competition at the festival in its 71-year history, walked the Cannes red carpet in a silent protest. Along with members of the jury, the group also featured Kristen Stewart, Patty Jenkins (Director of Wonder Woman) and Salma Hayek.

According to The Guardian, a new charter has been unveiled at the Cannes Film Festival. This charter, signed by the director of the festival Thierry Frémaux amongst others, will work to improve gender parity at the festival. Hopefully, other festivals will also pick up on this and implement the charter. Frémaux said that Cannes needed to question its own “practices, traditions, habits, and history. Cannes has stats that speak for themselves – and in a negative way.”

4. “Male movie stars would have to take pay cuts if they were serious about equal pay for women” – Salma Hayek

Salma Hayeki added to the feminist fervour by pointing out that men are paid a lot more than women in the industry. According to The Guardian, Hayek said: “If actors ask such inflated fees it will leave nothing for actresses. If the movie’s budget is $10m, the [male] actor has to understand that if he is making $9.7m, it is going to be hard for equality,” Hayek added. “Otherwise they will kill the movie.”

"We should have come together sooner, but it's okay. Let's not look back. We're together now." #SalmaHayek reflects on the power of women coming together to say #TimesUp. pic.twitter.com/KsH6ywepVU

We were already waiting for Ocean’s 8, starring Sandra Bullock, Cate Blanchett, Rihanna and Helena Bonham Carter amongst a few famous women, but thanks to Cannes 2018, we’ve just been informed of another film starring an impressive female star cast! According to Vanity Fair, Jessica Chastain’s film 355, will be featuring herself, alongside Penélope Cruz, Fan Bingbing, Marion Cotillard and Lupita Nyong’o. The ladies will be playing the roles of spies from agencies around the world who form their own team, named 355.

The secret's out! V.F.'s @That_Rebecca has the scoop out of #Cannes2018 on #355Movie, the female-driven James Bond–style film of your dreams. Get the details (An international set of deadly spies! A Marion Cotillard motorcycle fight scene! Lupita Nyong'o as an African intelligence agent!) at the link in bio. #Regram from @penelopecruzoficial, @bingbing_fan, @marioncotillard, @jessicachastain, and @lupitanyongo. 📷: @gregwilliamsphotography


Some might criticize this move but we know why Kristen Stewart took her shoes off at the coveted red carpet. Women are often required to wear heels as part of a dress code whereas men are not forced to put on any painful shoes. Stewart’s act makes a very powerful statement regarding this expectation from women to always be wearing heels at formal events.