Salman Khan is no hero 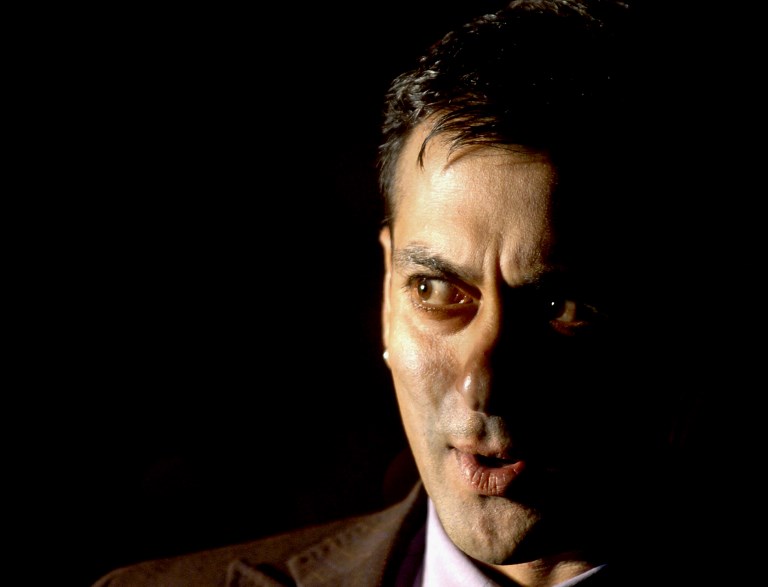 Salman Khan addresses an unseen audience during a fashion show to showcase the collection of designer Erum Ali in 2004. PHOTO: AFP

KARACHI: Salman Khan’s case isn’t just about a man illegally killing an endangered species. It is about a man of privilege and influence using his – or more importantly, being allowed to use his celebrity status to get away with, literally, murder.

It speaks of the divine status people in India give to their movie stars – and Pakistan isn’t far behind.

On Thursday, the Bollywood star was sentenced to five years of imprisonment by an Indian court for poaching rare antelopes known as black bucks. He walked free two days later after posting bail in the 20-year-old case.

Many in India, and even Pakistan, were quick to jump to his defense, calling the verdict too harsh and him a “victim”. For instance:

I am extremely shocked to hear @BeingSalmanKhan being convicted by session court but also having full trust in indian judiciary which has many other doors to appeal for final justice whatsoever. Since He is most loved person by industry N people for his human reasons too.

One from our very own:

In a world with no “NO” human rights, a great human being is being punished for killing an animal umpteen years ago under animal rights. Bash me all you want, but there’s something completely wrong about it.. mind you such human beings are our saving grace! #SalmanKhanVerdict

So happy for the bail of my dear brother @BeingSalmanKhan . Relieved. Come home. ‘JAI HO!’#SalmanKhan

His release was even celebrated with a dance:

This hero-worshiping is why Khan is seen as a “humanitarian” loved by many across India and not as someone who has been accused of hit-and-run, domestic abuse, stalking harassment and causally making rape “jokes”.

Here’s why you need to stop making excuses for him:

1) Involved in hit-and-run case (and acquitted)

While many people are quick to dismiss the case using the bizarre arguments of human rights over animal rights, let’s not forget the case Salman was involved in a hit-and-run case, where a person died. The actor fled from the scene of the incident but was later arrested, according to the reports.

This case was an inside into India’s class dynamics as well as its justice system.

In 2002, Salman was allegedly driving home with a friend when he ran over a labourer sleeping on the sidewalk, killing him. We say allegedly, because the actor never pleaded guilty in the case and in fact, his driver came forward saying he was the one behind the wheel.

In May 2015, 13 years after the incident, Salman was sentenced by to five years’ rigorous imprisonment, but he swiftly moved the Bombay High Court which granted him interim bail.

By the end of the year, Salman was acquitted of all charges despite glaring evidence. This included a report by a chemical analyst who had tested Salman’s blood had and told a court in 2010 that Salman was under the influence of alcohol. His bodyguard corroborated this statement, admitting the actor had been drunk at the time. Patil, later, changed his statement and was declared a hostile witness.

You can read about the case in depth here.

2) Accused of stalking, harassing and beating his exes

Khan’s ex-girlfriends, Aishwarya Rai, Sangeeta Bijlani and Somy Ali, have publically shared instances where the actor has abused them physically and emotionally.

“After we broke up, he would call me and talk rubbish. He also suspected me of having affairs with my co-stars. There were times when Salman got physical with me, luckily without leaving any marks. And I would go to work as if nothing had happened,” Rai was quoted as saying in 2002, according to Times of India.

The Wire, an Indian publication, wrote that both Biljani and Ali too came forward with similar accusations. “When he began to date Pakistani model Somy Ali, film circles were rife with stories of Salman dragging her by the hair, publicly berating her, and on one occasion pouring a drink on her head because despite his own fondness for tipple, he didn’t like the sight of his girlfriend drinking. After they broke up, Ali moved to the US and began a charity for victims of domestic abuse, a move she says was born from the deep depression her last relationship left her with,” the article states.

More recently, Khan was alleged to have run after his ex-girlfriend Katrina Kaif with a stick after disapproving of her attire.

In 2016 – yes, just two years ago – Khan, then 48, thought he was being funny when he said his filming schedule was so grueling, he felt like a “raped woman”.

Khan made his comments in an interview to promote Sultan. The actor’s full quote was: “When I used to walk out of that ring, it used to be actually like a raped woman walking out.”

Twitter was outraged and the hashtag #InsentiveSalman was used to condemn his words. It was following by a counter campaign #SalmanMisquoted.

Khan’s loved ones thought it was their responsibility to clean up his mess, even though he should’ve been the one to realise it.

His father, Salim Khan, asked people to forgive his son for his remarks.

“Undoubtedly what Salman said is wrong,” the veteran actor and screenwriter tweeted. But he added: “The intention was not wrong. Nevertheless I apologise on behalf of his family his fans & his friends.”

According to the BBC, Khan, in the same interview he made the rape comment, said that he had been able to quit every vice like cigarettes, alcohol and coffee except “women”.

Salman is known to hold grudges and as someone who’s bad side you do not want to get on. Take fellow Bollywood actor Vivek Oberoi’s example. Vivek, who is rumoured to have dated Rai after her breakup with Salman, was virtually blacklisted from Bollywood after he spoke out against the Dabang actor. At a 2003 media conference, Vivek claimed that Salman reportedly called him, 41 times and threatened to end his life.

This came with a huge professional price, according to Vivek’s recent revelations. “It was like a fatwa was issued against me from the powers that be,” he said, according to the Hindustan Times.

“When my personal life got messed up, I couldn’t keep my eye on the ball. Even if I gave a hit, work wouldn’t follow. Shootout at Lokhandwala became a huge hit, but I sat at home for a year after that.”

Salman’s feud with singer Arijit Singh also made headlines. Indian publication Quint reported that Arijit’s Jag Ghoomeya for Sultan was dropped from the film owing to his long-lasting feud with Salman.

“The feud allegedly goes back to the time when Arijit appeared in informal clothes and ‘chappals’ to collect the award presented to him by at an award show hosted by Salman Khan. A verbal exchange of snide remarks reportedly followed on the stage where Arijit said in jest, “Kya sir sula diya aapne?””

The singer went as far as apologizing to the actor on social media, requesting Salman to retain his song but to no avail. He even allegedly lost a song in Tiger Zinda Hai to Atif Aslam.

There you have it folks. Salman Khan is no hero, and it’s about time we stop seeing him as one.