How to get through Karachi’s heatwave

We spoke to experts on protecting yourself from the scorching sun 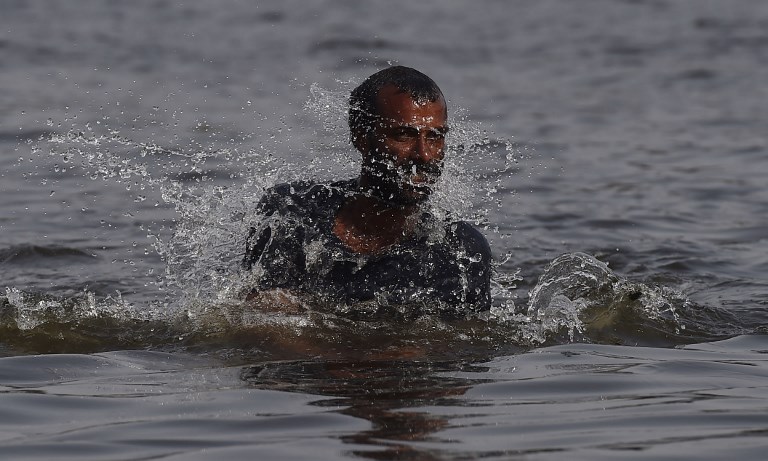 A Pakistani man cools himself off at the Arabian Sea watar during a heatwave in Karachi on May 20, 2016. Various parts of the country continued to experience an intense heat wave, with the temperatures reaching 50 degree Celsius in Pakistan’s southern Sindh province city Larkana and other cities. / AFP PHOTO / ASIF HASSAN

KARACHI: It’s here. Another heatwave. It’s not even April yet and temperatures have soared to 41°C.

Why do heatwaves occur?

The answer was simple: increasing urbanisation, multi-story buildings and growing population are the foremost factors, according to Dr Nuzhat Khan, an environmentalist and the principal officer at National Institute of Oceanography (NIO). Due to greater population, there is greater energy consumption, she says, adding that the imbalance takes place because forests are being chopped off while industries keep cropping up.

“In the last 50 to 60 years, life has gotten comfortable but the globe is very uncomfortable,” Dr Khan says.

While execution of plans and setting up of heatstroke centers, providing necessary aid such as doctors, water and shelters is the responsibility of the province and district, NDMA spearheads issuance of policies and guidelines, adds Colonel Baksh.

“We obtain temperature forecast from the meteorological department and then create a plan and issue a set of instructions to the relevant departments,” he says.

He concludes by saying that heatwave is an unforeseen phenomenon and the human body isn’t necessary equipped to acclimatise itself to a rising temperature. Therefore, steps are necessary.

“We are already issuing plans for the summer, usually the heatwave occurs before June.”

Who is at most risk?

People on the extremities of age are more prone to risk as they are the dependent population, says Dr Rodaba Anum, Resident Internal Medicine, The Indus Hospital.

Children normally don’t have the awareness to keep themselves hydrated. As for senior citizens, they may not have a strong sensory system to be able to identify that they are hungry or thirsty. In cases of illnesses that may be escalating or in their terminal stages, they may be on long-term medication which reduces a person’s ability to assess their fluid intake.

Further, people with occupational hazards such as delivery riders, fruit vendors, traffic policemen, and workers on construction sites who are exposed to the sun and sales representatives. Also, people who belong to low socio-economic groups who don’t have basic amenities such as fans or cooing systems suffer more.

Others such as those who are otherwise healthy but have a below average water intake or an inadequate nutritional intake should also exercise caution.

What are the symptoms of heatstroke?

There are a range of symptoms. Heatstroke patients are likely to suffer increase in body temperature without any sweating, which means that the body temperature doesn’t lower and the excess sweat stays within the body. “This isn’t the same as fever,” says Dr Usama Khan, Resident General Surgery at Civil Hospital, Karachi.

How to treat heatstroke?

If the patient is conscious, they should consume ORS (Oral Rehydrative Therapy). This is a drink which is available in powdered form and ready-to-drink packs.

If going to the hospital is not be deemed necessary, the attendant should place ice-cold towels in the patient’s armpits, back of the neck and under the feet to release heat.

However, if the patient is unconscious, Dr Khan urges that they should be immediately rushed to a hospital emergency.

Doctors will then use cold blankets and balance the patient’s body temperature to treat them, says Dr Anum.

Preventive measures, most often, may be the most ideal to curb chances of falling prey to heatwave. During a hot summer, it is advised to cut down intake of caffeine and alcohol.

“Drinks that consist caffeine and alcohol flush out water content from the body through urine,” says Dr Khan.

According to Dr Khan, the population is advised to consume edibles such as fruits with high water content namely watermelons and pineapples. Lemonade is also very vital, he suggests.

“However, word of caution for cardiac patients and for those who are on dialysis would be to consult their doctor prior to increased consumption of fluids because these patients may be on restricted fluid and salt intake,” says Dr Khan. Therefore, it is important to seek medical help before adjusting habits.

Other easy to implement measures include covering yourself properly, Dr Anum goes on, which doesn’t mean wearing warm clothes, but covering the body enough to reduce exposure to the sun. Covering the head and wearing sunglasses also help.

“These measures are necessary to avoid insensible losses from the skin through evaporation,” reveals Dr Anum.