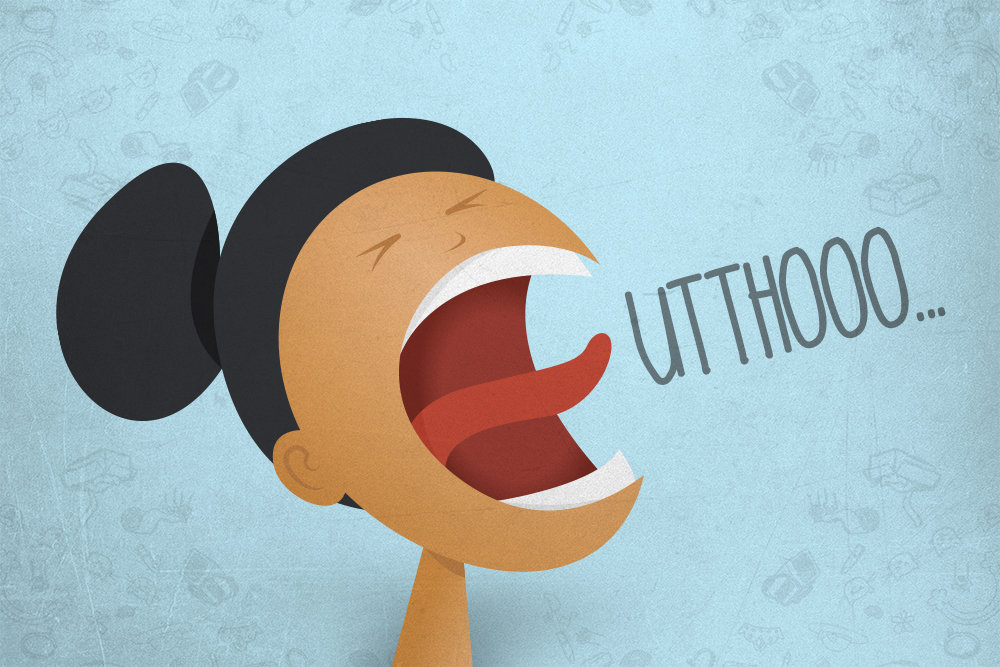 In our house, we have a driver, a cook, a chowkidaar, and a maasi.

The cook is Muneer. He’s been here since I was seven. My favourite things he makes are chapli kabab, pasanda, and fried macchli. He can also do burgers, hot dogs, waghaira. Muneer is tall and thin, very dark skinned, always in light blue shalwar kameez. He lives in the house, in the servant quarters with the chowkidaar and driver. All three of them come from villages in the north that are close to each other. I’m not sure exactly where, but I think near Peshawar. It takes seven to eight hours by bus to get there, and they go back for a month or so, every year. They have families back in their gaoons.

The maasi’s name is Crystal. She’s been here three, four years. And she is super duper loud. Every morning ‘UTTHOOO’, she yells, and she turns the fan off, and starts doing jhaaro. If you’re not sleeping, she won’t do jhaaro. But if you’re sleeping, she will on purpose come and turn off the fan and start. And she puts my stuff in the most random places, and then it takes ages to find. Sometimes Maasi will put oil in my hair, usually on a Sunday. And that’s the best feeling ever. Maasi has a round face and extremely white teeth (she brought me miswaak to use but I forgot after a few days). She doesn’t live in the servant’s quarters; she comes every morning around nine and leaves around five or six, takes a bus to Orangi Town where her family lives. She has four children, Anthony, Jonathan, Rebecca, Shumaila. Maasi is Christian. Sometimes, she tells us horrific stories about Muslims refusing to drink and eat from her cutlery or saying gross things to her about Christmas etc. Also, one of Seema Maasi’s sons was killed. He was in a relationship with a Muslim girl, and when people found out, they did black magic on him, and he died. That was a sad time for her.

One day, Maasi mentions to us that her daughter, Shumaila, works in a beauty parlour, that she does maalish, blowdry waghaira. Ma and I say that’s great, why don’t you bring her over sometime with you and she can do our maalish. So that’s what happens. Shumaila comes over to do our maalish.

Mama and I always make a joke out of Maasi’s loud voice. We assume she talks like that because she’s hard of hearing, and when it gets ott, we cover our ears with our hands and say, ‘maaasi, aahista bolo.’ This time, when she comes with Shumaila, she introduces us and then says, in deafening volume, ‘CHAI BANAOON?’ and I notice Shumaila wince. And this is weird to me somehow. Shumaila is embarrassed of her mum. Her loudness, which has become a family joke to us, is maybe something else to her family. This all strikes me as a revelation, though I can’t explain why.

Shumaila does my maalish first. In my room. We spread out a towel on the floor and she uses sarsoon ka tel and it feels great, especially the head, neck, shoulder part. Then I drink chai and watch TV while she does Mama. After an hour, Mama emerges looking all blissed out, with her hair like a bird’s nest. ‘Good, na?’ she says to me, and I agree. She says thank you to Shumaila and gives her Rs2,000.

Maasi looks all awkward, twirling her jhaaro round and round one spot on the floor, and I continue to stare at the TV as if I haven’t heard. Maasi’s monthly salary is like 10,000. The channel is on Masala TV and they’re making some gross trifle type dessert with pineapple in.

Meanwhile, Shumaila doesn’t budge. ‘Yes,’ she says, and continues to look Mama straight in the eye, until finally Mama speaks.

‘Oh. Accha. Theek hai, aik minute’. And she goes back to her room to get more money.

After she leaves, Mama says to me, ‘expensive, hena?’ And I agree. She’s basically charging the same as those defence walay salons.

‘I think we won’t call her again,’ Mama decides. ‘She seemed a bit off to me. Too ambitious’

Too ambitious. The words whirl in my head for a long time. Too ambitious. What also stays with me is the embarrassment Shumaila felt at her Mama’s voice (or was it our reaction to it?), along with that defiant way she looked at Mama. And with her words, ‘No. 2,000 each’.

I thought ambition was a good thing, that we are supposed to be ambitious. I didn’t know it was possible to be ‘too ambitious’. But after Shumaila left, I started thinking, maybe ambition is also a human right. Maybe only certain people are allowed to have it. And maybe our ambition is at the expense of others too.

Maalish works differently with Nimko, by the way. When you pet her, you can’t really tell if you’re the one giving or receiving. There are no demands, only requests, and the act is only performed when both people feel like it. The maalish is both the service and the payment. This is what maalish would be like at all times if we lived in a different kind of world.