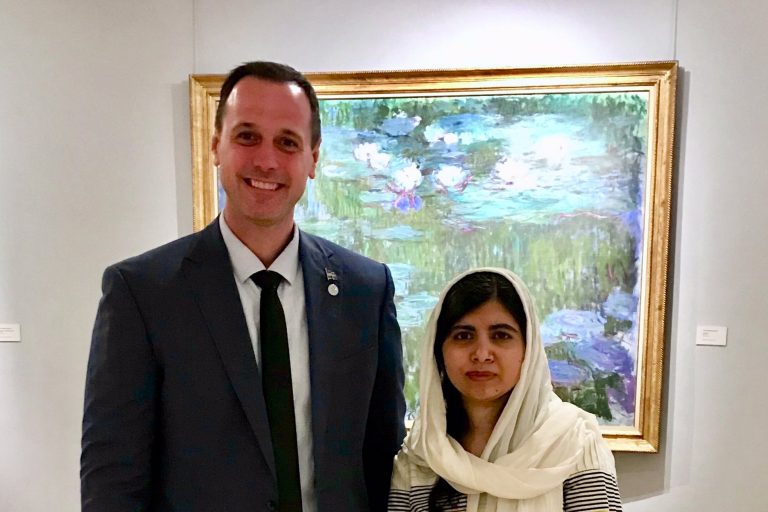 The tweet, however, generated an interesting response from users as people were quick to call out the hypocrisy of the Quebec administration government for passing Bill 21, known to be ‘racist’ in nature as it does not permit public employees to wear religious attire to work. Taking away such a personal right that can arguably be one’s identity did not sit well with people when they saw the education minister posing with someone wearing religious attire.

Things became progressively worse when journalist Salim Nadim Valji asked Jean-Francois what his thoughts on Malala becoming a teacher in Quebec are.

Mr. Roberge, how would you respond if Mme Yousafzai wanted to become a teacher in Quebec?

Jean-Francois replied to his tweet [translated] saying: “I would certainly tell her that it would be an immense honor, and that in Québec, as is the case in France (where we are now) and in other open and tolerant countries, teachers cannot wear religious symbols in the exercise of their office.”

Many twitter users have deemed this as an unacceptable jab at someone who has been through and achieved so much for the educational rights of younger women and have pointed out that the mere aspect of one’s attire should not determine acceptance of employment.

I sincerely mean this when I say y'all elected a bunch of complete dickhead racists in Quebec, and this is coming from somebody who lives in Doug Ford's Ontario
https://t.co/B14A0ZWPKl

Stupid, racist, #Quebec law: Malala survived a Taliban bullet to the face but God forbid she teach with her scarf on. Whoops, can I say "God"? :s A garbage law, @francoislegault, utterly garbage. #cdnpoli https://t.co/lfX2yJ3oPP

How dare you? You're a Minister of Education? In our Canada? In this century? Which Canadian federal party leader is OK with this? If you cannot talk back to this, it's hard to think of you as worthy of national leadership. https://t.co/5qTX81pxsK #Malala

What you said regarding Malala, is so humiliating to the whole world, and so very misleading. She definitely has millions of better places to go to educate people than coming to Quebec with open head to teach under #Bill21

Malala expresses concern over safety of Kashmiri women and children