The Diary of Queen Shugufta: On Kitty Parties 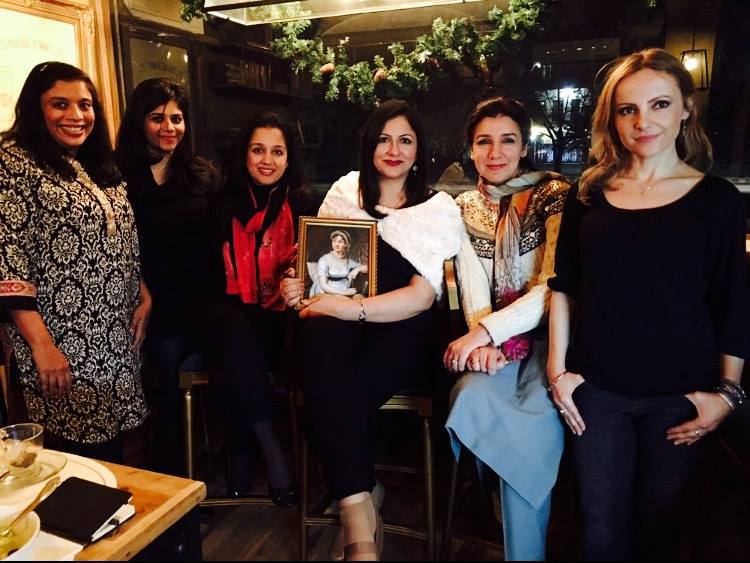 The Diary of Queen Shugufta, age 16

On the last Saturday of every month, Mama goes to a kitty party, with five or six of her friends.

No one can say ‘kitty party’ in our family without an eye-roll. The worst is Abba, he says, ‘oh, aaj Mama ki kitty party hai’ with the biggest eye roll you can imagine, and if there’s another Uncle in the room, they say this and exchange a look, and a snigger. Mama just ignores it, or she smiles, like she’s also in on the joke. I guess, how long can you get annoyed, if that’s how men have been reacting for years and years? It’s funny, ‘cause no one does it when the men get together for cricket matches. That is a big event. Respected and cared for. The house is cleaned, Muneer makes samosas and kababs, and the sound system is checked and re-checked. Then, the men get together. And every time there’s a chakka or whatever, everyone stands up and goes like, ‘Yesss!’ and they high-five each other. And if we lose, bas, everyone mopes for the rest of the day. It’s cute and all, I enjoy that stuff. But on some level, it’s so much more ridiculous that kitty parties. At least in kitty parties, the bonding is over things more personal, more relevant. In these sports nights, the men, so afraid of actually talking about their own emotions, find this excuse of how a team that they identify with performs, and then they bond over that. It’s a great ritual, for sure, and very important, but the amount of respect and validation it gets as opposed to the kitty party is ridiculous.

Maybe it’s also ‘cause of the name – ‘kitty’ party. It makes it sound quite silly, na? Too cute cute. Implying, maybe, that the women are getting together, like little kittens. OR that they are getting together to have catty conversations. But in reality, the term refers to money, to a kitty that is collected. Every month, each woman contributes a certain amount of money, like a thousand rupees. And then the kitty from the previous month is given to one member of the group. It’s actually a saving system, or a form of micro-credit. It’s an age-old tradition in India and Pakistan and it has helped women manage their money, and participate in a shared economy.

And of course, there is the social aspect. I think kitty parties, like all female gatherings, are essential for well-being. Whenever Mama comes back from her kitty parties, there’s something different about her. A kind of broadening of the smile, a gentleness in her tone. Something playful and child-like is revived in her from these parties, where, I guess, she gets a break from being in the mother/wife role that she occupies for most of her existence. She comes back from a kitty party and tells me about a new kind of cheesecake she tried, or a cool new chai place they discovered, or something new she learned about her friends. And my Nani also has a kind of group like this. Some of her friends come over from time to time, and they knit and drink chai and talk and talk and talk. Some of her friends have passed on, and some have bad health, so the group has become smaller but it still continues. Sometimes, it’s just my Nani and her childhood best friend, sitting in their saris, knitting, and giggling over stories that nobody else was witness to. It’s beautiful, their friendship. Consistent and nourishing and going back to a time before even my mother was born. I can see how important these meet ups are to my Nani, and even more important ever since my Nana passed away. Sometimes I wonder why my Nani and her bestie don’t move in together now that their husbands are gone. I think that would be so sweet. Because this is another truth: men die before women, and so probably, all that we will be left with as women is the company of our female friends. I hope I remember to nourish these friendships now, so that, like my Nani, I’m chilling with Fizza and Shazia well into our seventies.

The other thing is, men have always had other places to go: the office, the club, the dhaba, whatever. Our mothers and grandmothers, whose lives have revolved around the home and whose movement has been so restricted, have not had the same forms of escape. That’s why the kitty party or other women’s circles are essential. And maybe on some level, the men know this. And one of the reasons that the kitty party is mocked is precisely because of the power they hold. In these private, intimate gatherings, women talk. They talk about their husbands, their in-laws, their children, their desires. They confer and share and grow, and a space is opened up for subjects that are otherwise taboo. Maybe this is considered dangerous by these same husbands and in-laws and children, who would prefer that these women didn’t have places to confer, debate, strategise, complain, vent, create. These days, with Abba in Dubai and Mama still reeling from Farhad’s coming out, I know those topics occupy a big part of the conversations she’s having. I catch hints of it in her phone conversations. And I don’t know what Mama will do about those two things, but I know these kitty parties are a source of strength and sustenance, and so they can only be a good thing.