Diary of Queen S: The Sleepover 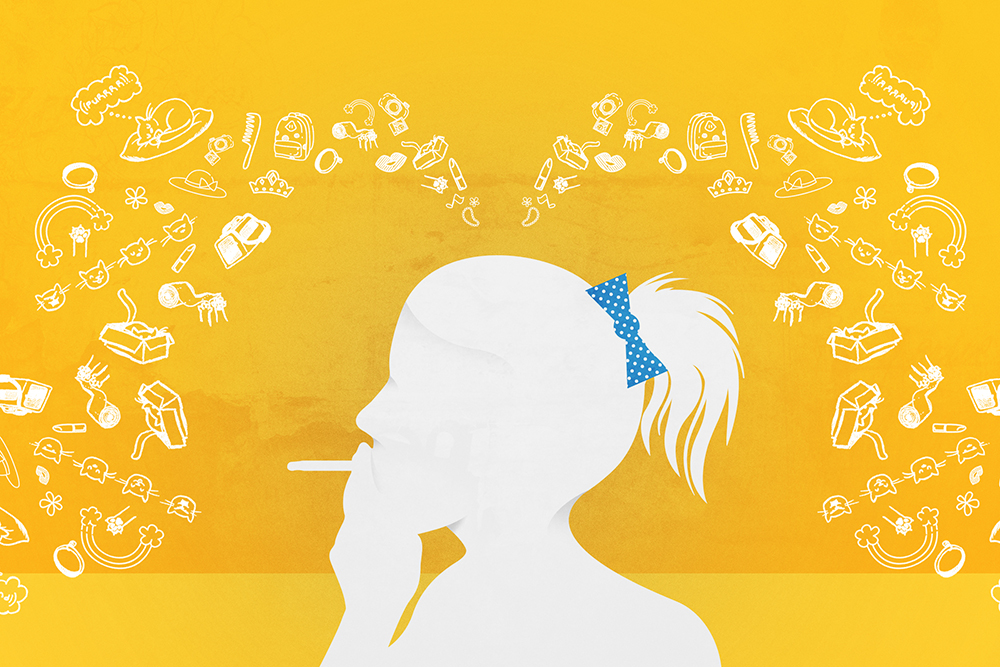 On Friday, Saima and Fizza come over for a sleepover. Nimko stays with Farhad because Saima claims to be allergic.

Fizza’s still going out with Noman, and since she’s not allowed to speak to him at her house, the first thing she does when she gets to mine is – call Noman. And they go on speaking forever. About the most random things. She’s telling him about some argument she had with the science teacher; then, she’s giggling away at some stupid story he’s telling. Then, they’re planning a group trip to the cinema. Yeah, right. As if I would be a part of this charade, everyone getting together and going to watch a film just so Fizza and Noman can hold hands in the dark or whatever. Over my dead body.

Saima and I start having our own super interesting conversation and I see Fizza watching us from the corner of her eye, all curious like. She finally hangs up.

‘What were you guys talking about?’

Me: Oh, bas, nothing, go back to your boyfriend. That’s why you came here, na? To talk to him. Not to hang out with us.

I want to keep it from her for longer but Saima can’t contain herself,

‘I was just telling Shugufta I brought the stuff!’

And she pulls out of her bag – a pack of cigarettes and a can of beer. Stolen from her brother. We’ve never smoked or drunk before, and we’ve been planning this moment for months. And it’s finally happening.

We go to the toilet and light the cigarettes, watching ourselves in the mirror. And we pass the beer around, two sips each and pass. We cover the door ka neechay wala part with a newspaper and after each puff, we spray air freshener all over the room.

Saima says we looked like older, sexy women like that, smoking in front of the mirror. She suggests playing a game where we pretend we are meeting ten years from now, in the bathroom of some fancy club.

‘Wait,’ she says, and she finds a chamkeela dupatta from my shaadi clothes wala drawer. She strips to her bra and chaddies and wraps it around her like a ball gown. ‘OK. Ready’.

Me: (long puff) Hai, hai. Kya karoon? I’m nominated for Nobel Prize and Oscars on the same day. Which one should I go to?

Saima: Hai, hai, darling. I don’t know, laykin I have no time to help you. Zayn Malik is waiting for me in our penthouse in Miama. I have to catch the flight now.

Then, Fizza: Hai hai, girls. What about me? My husband, Noman, bought another car but we only have four drivers.

Bas. That pisses me off. Firstly, so materialistic. And secondly, abh Noman ko husband bana liya.

Me: Haan, I thought so. I walked in the other day and saw him kissing the secretary.

‘Wtf, Shugs,’ Fizza says, ‘What do you have to spoil the game for?’

Saima, at this point, is laughing her head off/choking on the cigarette smoke.

Me: Kya, Fizz? Just trying to make it realistic.

Fizza: That’s not realistic. Accha, fine. Realistic? Ohh, Shugs, I just got a call from the committee. You didn’t win Oscar or Nobel. It was all a mistake.

Then, bas. An hour-long fight begins. Fizza cries. I get mad. Finally, Samia puts on some Beyoncé on her laptop and suggests we learn the choreography to ‘Single Ladies’. We do it grudgingly at first but those steps are hard, so we get into it soon, and the anger starts to go away. Then, we try Selena Gomez and some Coke Studio, and bas, everything melts and it feels like the time before the Noman thing happened. The next morning, we make mango milkshake for breakfast.

Fizza and I were best friends since we were seven. Then she started dating the boy I liked. But if I think about it, I don’t really know Noman. I haven’t spoken even two sentences to him. And Fizza, Fizza’s into him, but that doesn’t mean that she doesn’t still like me too. Noman’s not going to dance to Single Ladies with her, or do each other’s hairstyles, or make up stories in the bathroom. Maybe Fizza’s heart is big enough for both of us, and maybe I should stop fighting with her so much.